Instead of taking the South Coast Highway, I did my best to find the road less travelled again, riding mostly on dirt roads, except for a few kilometer before and after Munglinup for stocking up on provisions.

This was not a head wind, but a head storm. I am exhausted and have sour knees after ten kilometer so decide to call it a day at the first opportunity. I pitch my tent behind a tree and some bushes giving some reasonably good wind shelter. I think technically I’m not supposed to camp in the Monjingup Lake Nature Reserve, but I feel there was no other option.

I first roll down towards the Monjingup Lake. They have built a small but nice shelter with information, there is a clean toilet and a nice shelter for bird watching at the lake’s edge.
I must say the responsible people for all this infrastructure do an excellent job, the bike path, the very well maintained waterfront all along the town, the infrastructure at the lakes around town,…

I am riding in a westerly direction over the Telegraph Road. A few kilometer to my north is the South Coast Highway, which I want to avoid desperately, and to the south are some high dunes. All maps show the Telegraph road ends after a few kilometer and you have to loop back to the Highway. My map on the computer showed a tiny red line continuing westward.
At the junction with Bates Road, a sign says the Telegraph Road won’t continue, but I
ignored it. I was rewarded with a completely free sandy road, a bit undulating and views to some really high dunes. Some sections were too sandy and I had to push, but this is wayyyy better than the highway.
I spot a flock of Black Cockatoo’s. Really beautiful birds.

I hit the asphalt again at the junction with Murray Road, riding through a swarm of wasps for 50 meter. None of them stung, but it was a strange experience hitting all these wasps.

I have to ride 1,5 kilometer on the highway before I take a right turn on the Dalyup Road where I am again on dirt and completely traffic free.
Apart from the traffic on the highway I only saw a school bus in the end of the afternoon.
Very hard day against the wind. And the forecast is it will continue. the wind will shift to southwest, but so will my driving direction as well.

Another day battling against a fierce head wind. Not long into my ride I see a snake taking a sun bath on the road. He/she is about 90 cm long. After I stamp the ground a few times with me feed, he/she wakes up and makes a quick exit to the side of the road.

The rest of the day is quite uneventful, just that hard work against the elements. I remain on the undulating dirt roads north of the highway. Kilometers and kilometers of fields with yellow flowers.

From my well sheltered camping spot, I could hear the wind in the trees as it was picking up force after sun rise. And boy was it a head wind again. My track was climbing at one percent, and combined with this head wind I was moving forward at something between 4 and 5 km/hr.

Eventually I hit the South Coast Highway again.
Five kilometer later I’m in Munglinup, where there’s a roadhouse, my reason for going shortly on the highway. They sell drinks, bread, chips, ice-cream, chocolat. I eat a warm unhealthy lunch of fries and ….. I don’t know, some mysterious things which I imagine counts as the meat of my meal. 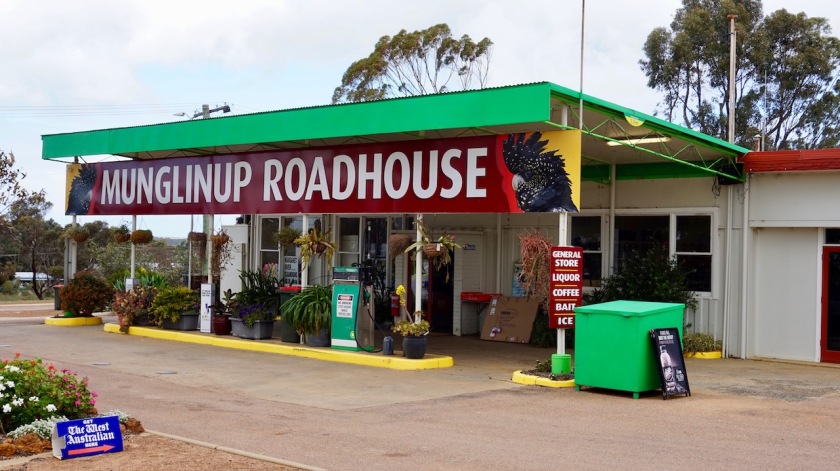 Good, stocked up with water and bread I continue. Another 3,5 km/hr on the highway, then I take aleft turn to another dirt track. The ladies in the roadhouse said I shouldn’t take this road towards Hopetoun. “Too dangerous.”
“Why ?”, I ask them.
“There could be snakes on the road.”
Well, I think those snakes are far less dangerous as the car drivers on the highway. Especially snakes on the road, which I see from far away.
Snakes in the bush, when I am searching for a camping spot, that’s another story maybe.
I call it a day pretty early as it seems it might start raining. I pith the tent along a little side track of this dirt road.
Only half perfectly sheltered for the wind. Hopefully it will be sufficient.
It was much easier to find good sheltered places in the desert as here in this agricultural region.
I can see kilometers and kilometers of new land is cleared from forest to make new farmland.
It is not only Brazil which is a problem. Everywhere on the planet we are doing the best we can to destroy it. But of course, ‘this little bit is not going to make any difference…’.

It rained a lot last night and the little dirt road towards the main dirt road is flooded. My main dirt road is mostly dry but so soft it feels like riding over a sponge. Combine that with more head winds and little hills and the going was slow again.

To my surprise there is almost no traffic on that little road skirting the shores of the Southern Ocean. Four cars all day. I see a few kangaroos and a fox.

There are not many direct views of the beach, as the dunes are in between and the road is mostly a few kilometer from the shore. There are a few lakes between my road and the dunes, the biggest one Lake Shaster.

Starvation Bay is one of the few places where one can actually go on the beach.
It is also the beginning (or end) of the Rabbit Proof Fence, an 1.832 km fence running all the way to Port Headland. I didn’t see any fence though. 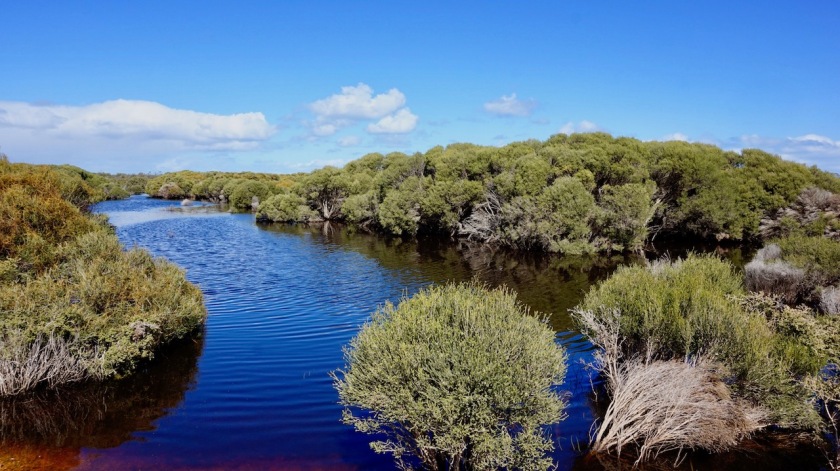 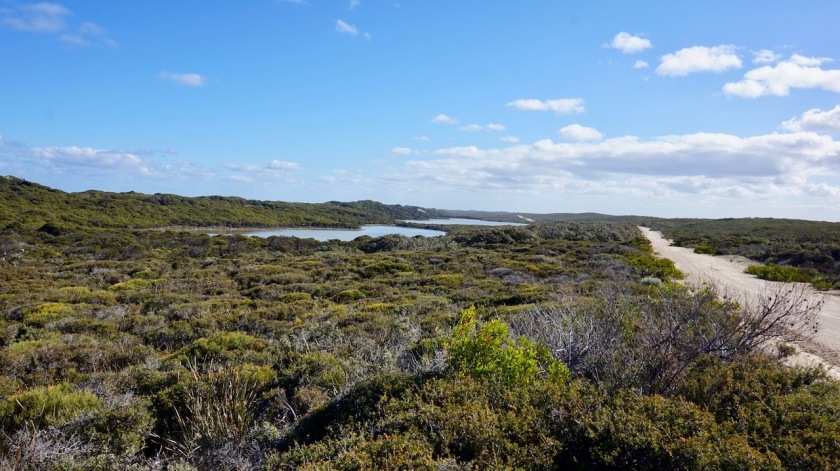 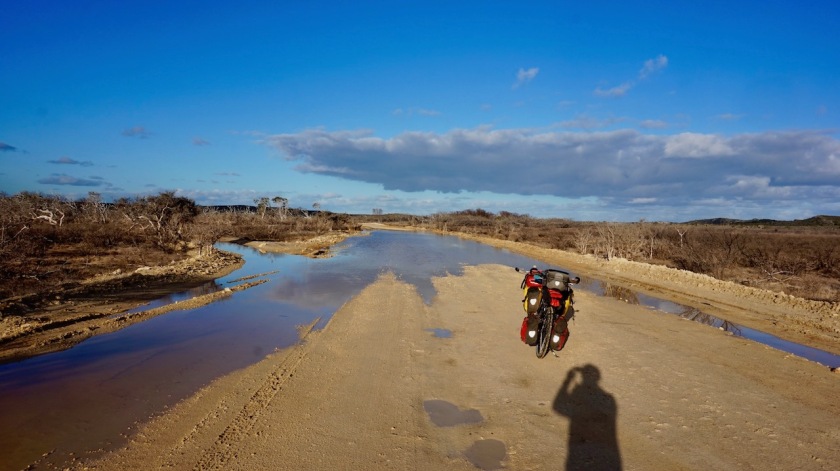 Today my route runs much closer to the beach with a lot of possibilities to go over the dunes and have a look at the fantastic empty white beaches and the blue ocean. 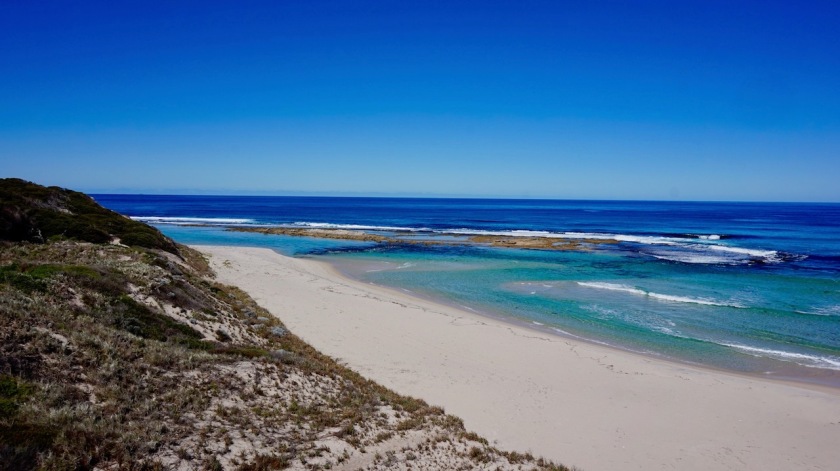 I took some rest days in Hopetoun. It is a perfect place for me. It is just a small village, at the end of a death end road. I guess it gets busier during holidays but for now, it’s all peace and quiet.
The beaches are spectacular, both sides of town.
I also made a trip to East Mount Barren. I will pass there on my way out, but I wanted to make a full day trip of it and take my time to enjoy it.
There is a new road, just opened a month ago, running between the Southern Ocean and the Culham Inlet. Then there’s a steep climb up the flanks of East Mount Barren.
The hike to the top takes about 45 minutes. The views to the coast and to the Fitzgerald River National Park and the Whoogarup Range are spectacular. I was more lucky with the weather then when I wanted to climb Frenchman Peak in Cape Le Grand National Park. 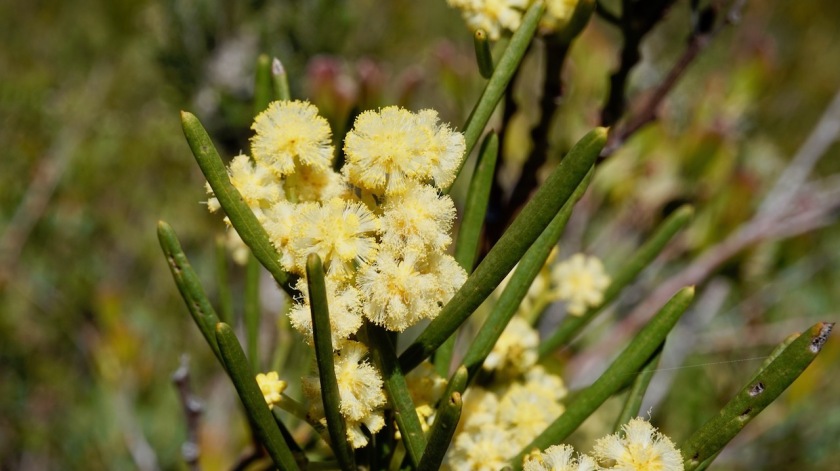