Since days I’m in doubt whether to continue my route north via ruta 40, which goes along some spectacular ravines and over the Abra del Acay, Argentina’s highest mountain pass (4.972 meter), or via Antofagasta de la Sierra through the ‘Puna de Atacama’, a very desolate high plateau.
The website from the ‘Vialidad’, that must be the Argentinian organization responsible for the roads, says since a while the road over Abra del Acay is closed due to flooding.
Not very promising.
On the other hand, two cyclist I met further south who came via Antofagasta de la Sierra said it would be horrible to cycle that road in a northerly direction.
Tough choices to make, as both options seem to throw their difficulties at me.
In Belén, I ride into Frederic again, a French cyclist I briefly met further south in Villa Union.

Together with him I ride that same day towards EL Ejen and decide to ride the route via the Puna, towards Antofagsta de la Sierra.
Starting from Londres at 1.200 meter, El Eje at 1.775 meter, we cycle up towards a height of 3.992 meter at Portezuelo de Pasto Ventura. 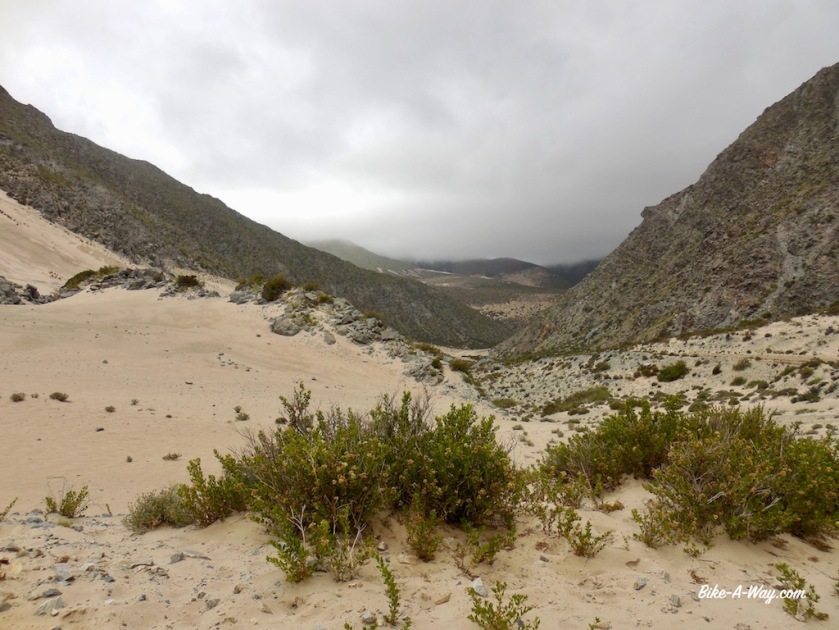 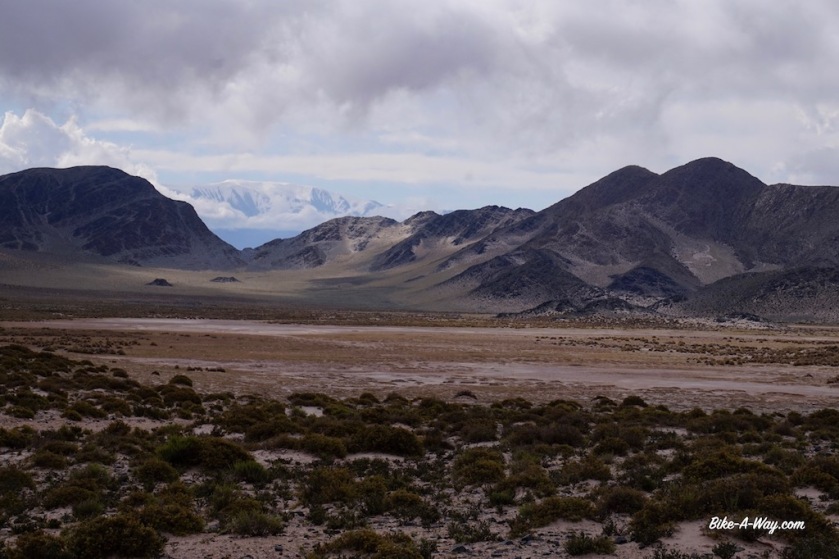 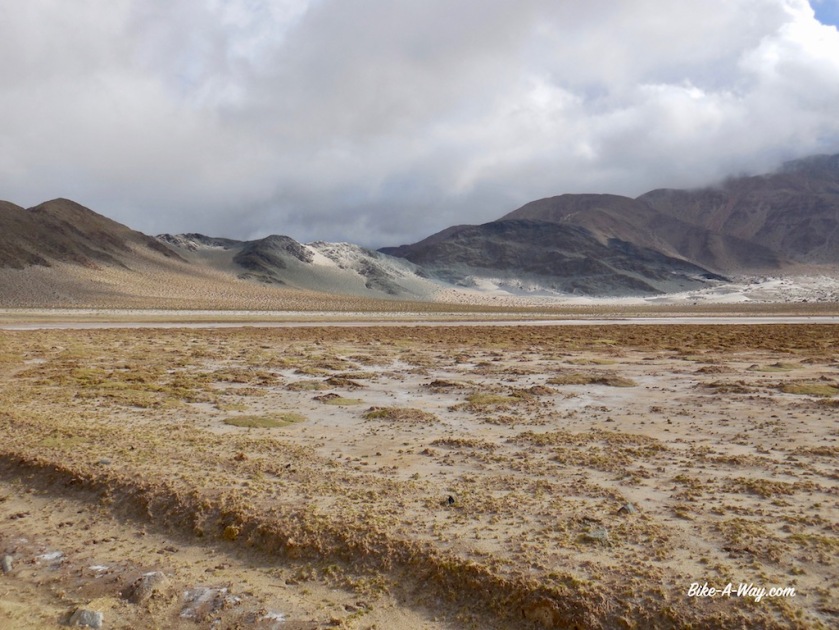 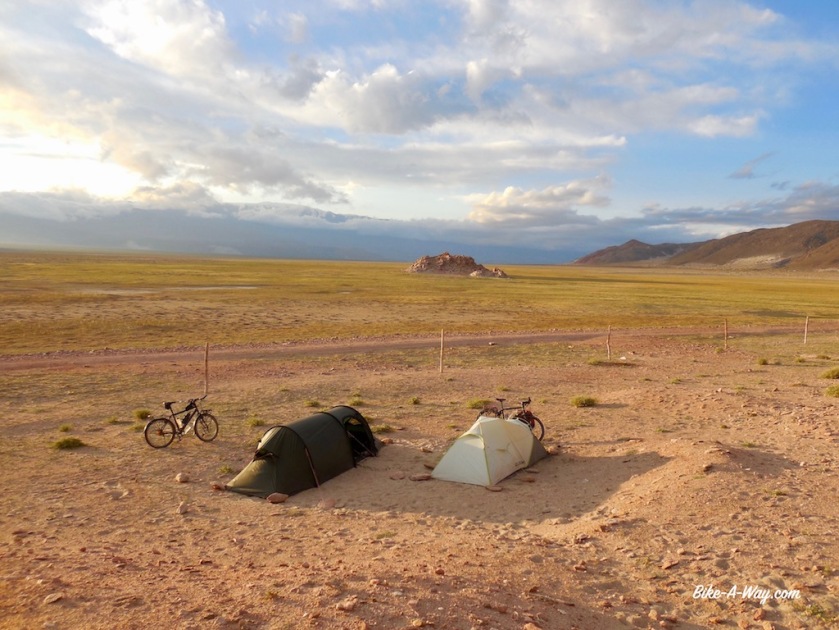 The straight road of 20 kilometer into the hamlet ‘El Peno,’, at 3.350 meter seemed to take forever against the strong Puna winds.
It seems the elevation doesn’t affect me too much so far, but both Frederic and I have diarrhea, probably from water we took from a pipe at El Bolson. And diarrhea sucks a lot of energy out of your body. 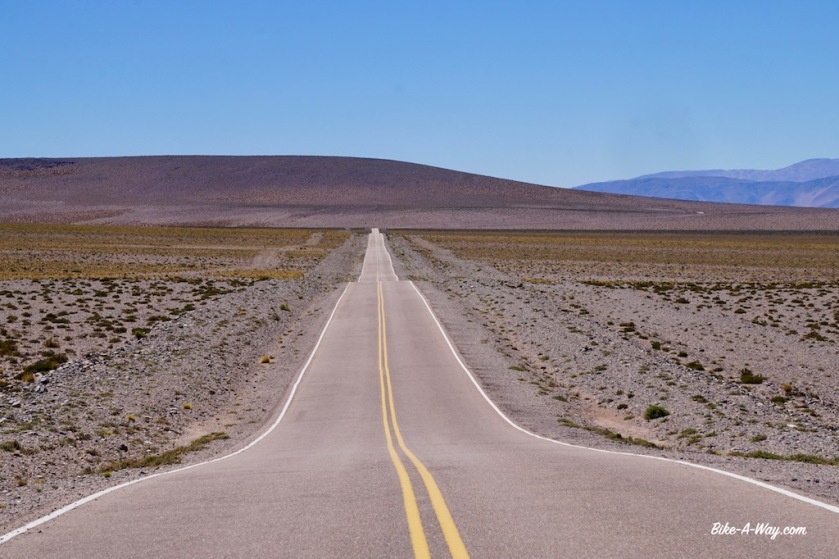 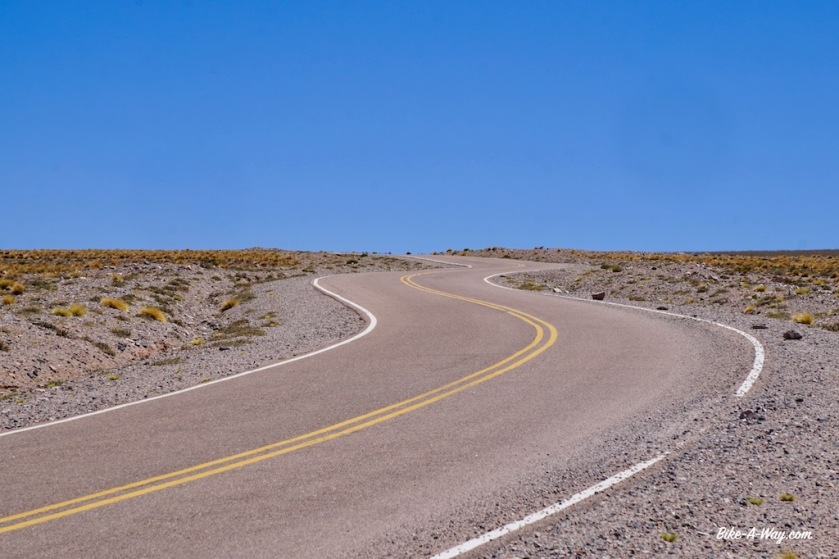 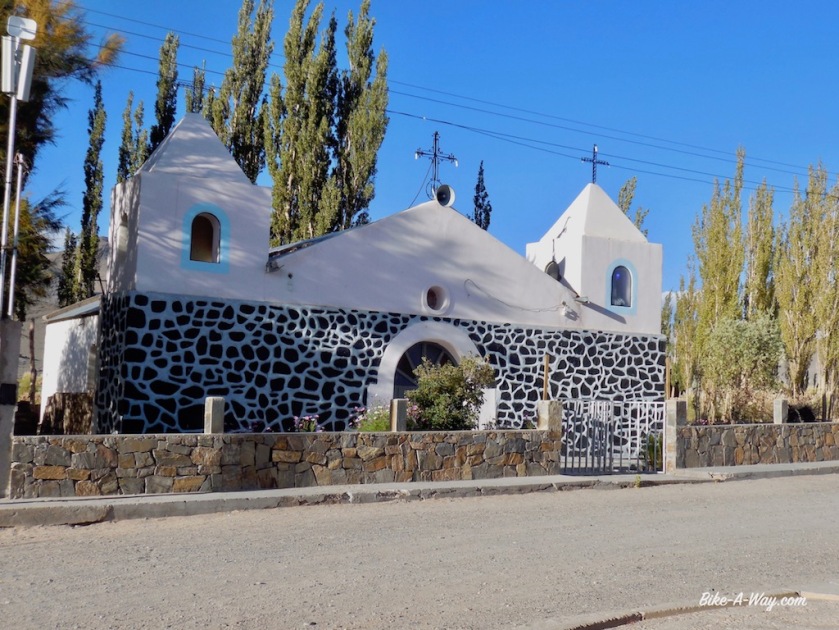 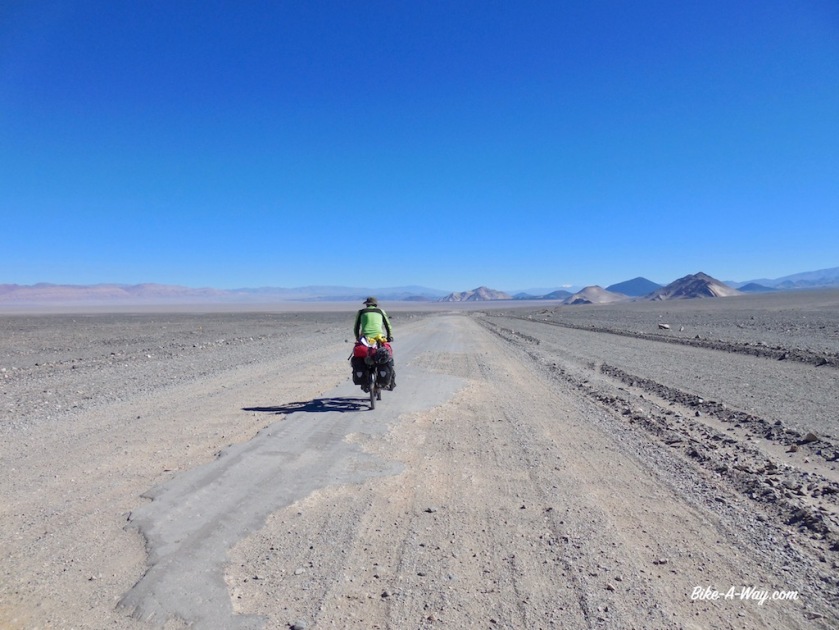 The big test comes after Antofagasta DLS, the climb from 3.300 meter to the ‘Abra Falda Cienaga’, a pass at 4.442 meter.
Riding stretches like this, it is not only elevation what makes it difficult. The road promises to be a mess, there’s the wind at this altitudes, the total absence of water, no villages for provisions and the sun which is burning immensely now in summer. The days are hot, but after the sun sets, it cools down very rapidly.

I leave town with four days worth of food, i.e. 1,2 kg of bread, two large packages of chocolate, six tins of paté, a pot of ‘dulcé de leche’ (which I find awful, but is easy to carry), two cans of tuna, two tins sardines, 500 grams oats meal, 500 grams rice, 500 grams spaghetti, three tomato’s, two peppers, three onions, garlic, parmesan cheese, a lot of cookies, an apple, a banana, dried fruit, nuts, tomato sauce, curry powder, milk powder, chocolate milk powder, tea, instant coffee and …. sixteen liters of water.
I hope to ride to Salar de Pocito’s, the next hamlet 220 kilometer away in three days.
So I’ll have 5 liters of water a day to drink and for cooking, dishes and 0,33 liter/day to brush my teeth.
Three Imodium tablets should keep the intestines at bay.

The road starts to climb seriously at Paycuqui, a hamlet of three or four houses. I thought the Puna would be a colorless, desolate high plateau, but it is much, much more beautiful as expected. Mountains in grey, yellow, green and red, many Vicunas and …. a little tail wind to help me up !
I camp just under the pass at an elevation of 4.358 meter, my highest camping spot ever. Some large rocks protect me well from the wind.
Many cyclists I meet seem to get by on a diet of just pasta with tomato sauce or even only olive oil, but that doesn’t work for me.
So as the sun sets at 19:45, I’m cutting peppers, onions and garlic to make a nice rice & curry dish, with some tuna at this altitude
At 22:00, I shortly leave the tent again. The last brightness from the sun in the west is gone. The moon rises after midnight today. No light pollution for hundreds of kilometer, and at this elevation, the night sky is simply unreal. A shame I don’t have a camera anymore with which I could catch it, but I’ll always remember it. 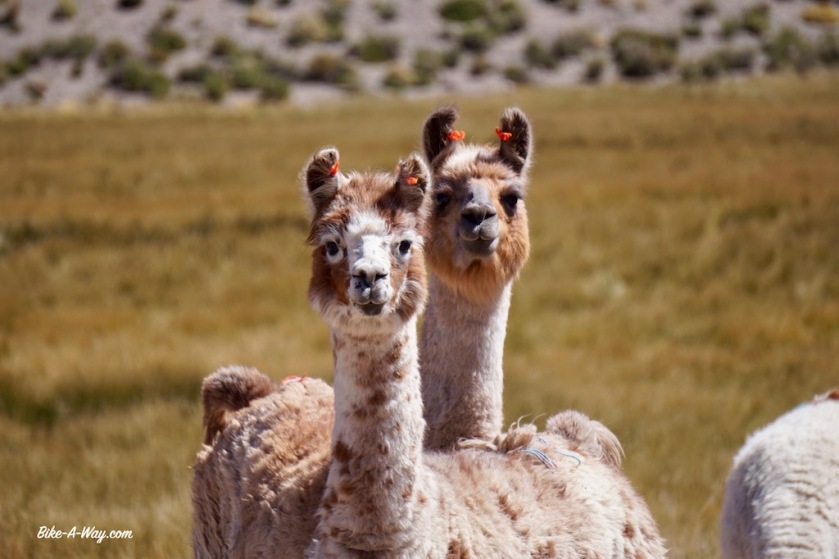 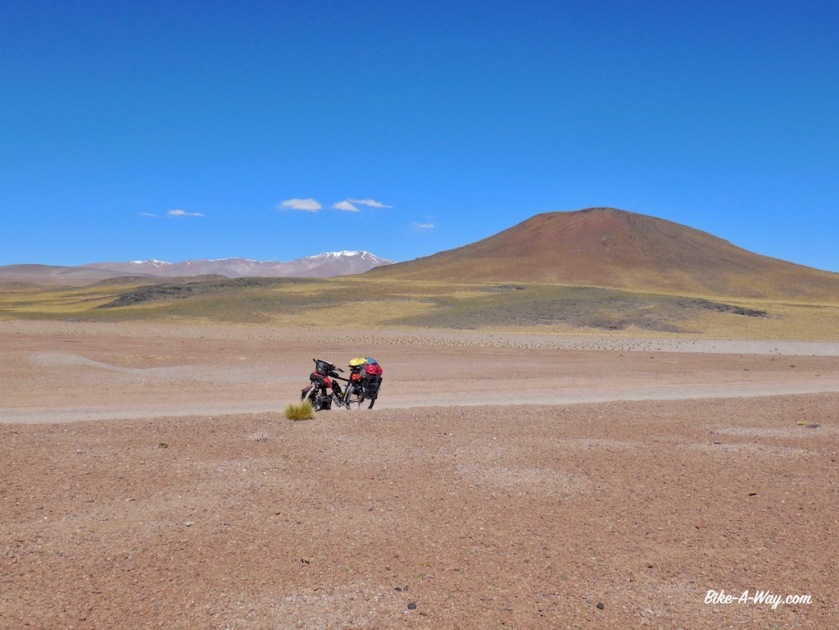 From my camp spot the next day, the road undulates for a while and it seems to take forever to reach the pass. A while ago I downloaded a bunch of episodes from ‘The Date on Friday’ from 2016 and 2017 (De Afspraak op vrijdag), a program from Belgian television discussing the political events of the last week. So I’m getting a little bit up-to-date again.
After 20 kilometer or so, I’m finally at the top. 4.432 meter according to my gps readings. I also passed the 30.000 kilometer since I started this trip in April 2016. 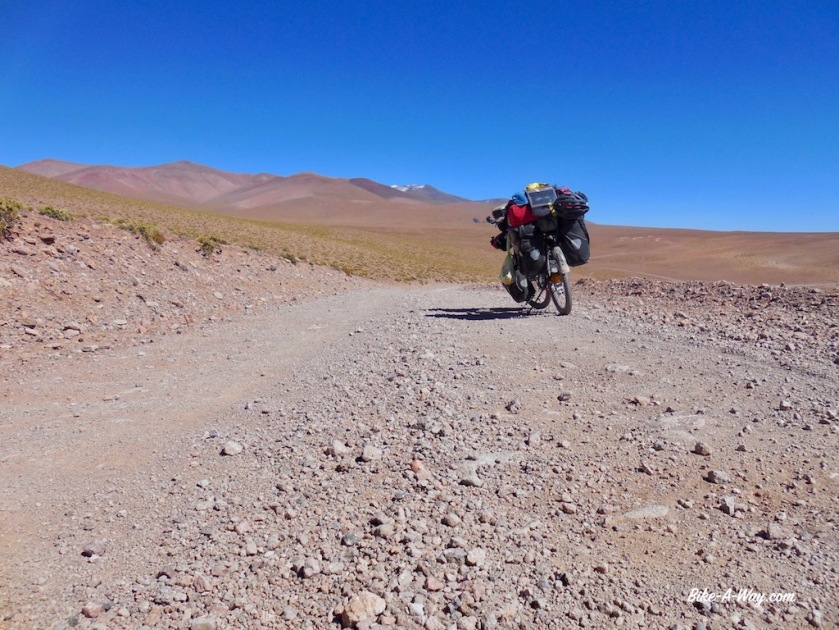 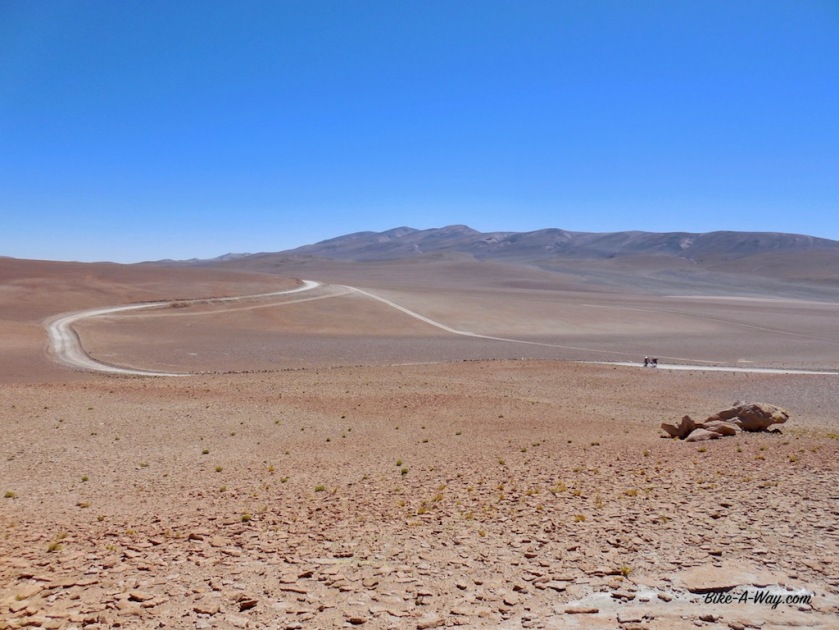 After yesterdays short day of 47 kilometer, I was hoping to make some better progress today but the road keeps descending and climbing. I cycle slow but even then I still stop to just look around. It’s like I’m cycling on Mars.
The road is dramatically bad. It’s washboard all the time, with often deep sand thrown in to it. Many times I need to push the bike, which sinks into the sand with all that weight. I breathe heavily at this altitude.
Good, rideable sections are short.
Especially the downhill towards the ‘Salar del Hombre Muerto’ (salt plain of the death man) is awful, as are some parts of the track around it.
After cycling all day above 4.000 meter, the salar is at an elevation of 3.980 meter.

After sixty kilometer I arrive at the unmanned police post north of the salar. It’s basically just two containers which are unfortunately locked. They have a water tank behind them, which I opened from the top. The water was lukewarm from the sun all day, so I had a nice shower in this dry high altitude desert.
I pitch the tent behind one of the containers. Less scenic then the day before, but again properly sheltered from the wind.
Now I’m already 32 kilometer ‘behind schedule’, so it’s good I took again too much food.
I filtered water from the tank, which I use for cooking, do the dishes and brushing teeth. Even with a day extra, I should be fine with the water to reach Salar de Pocitos. 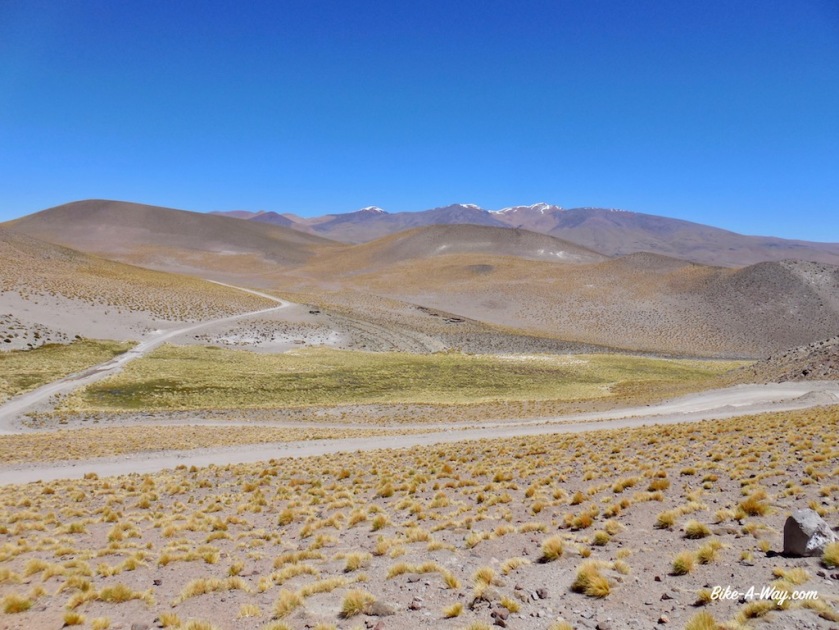 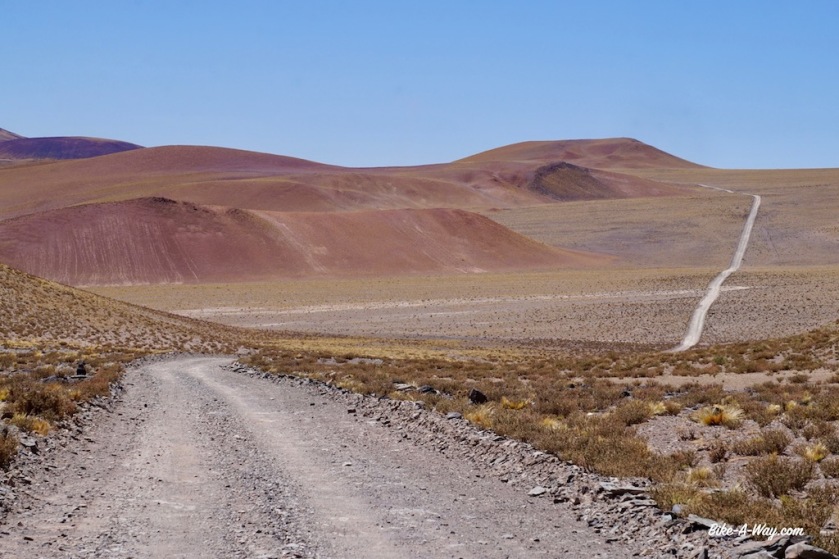 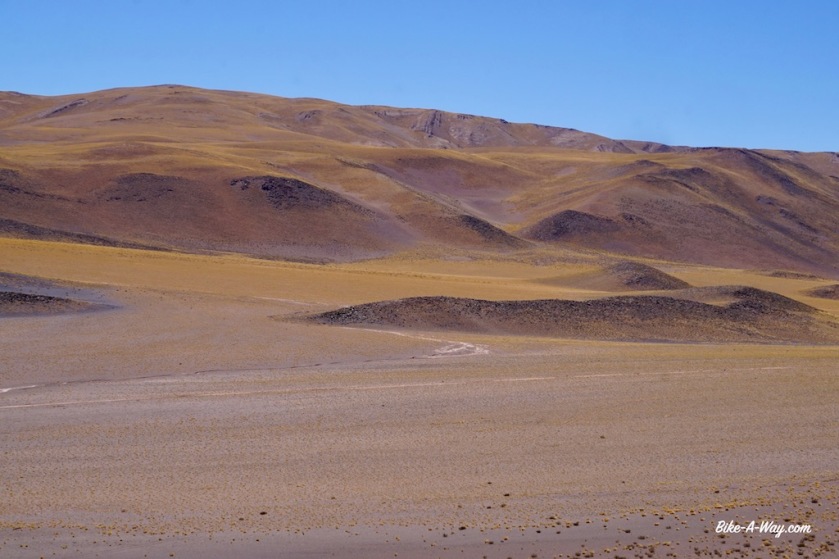 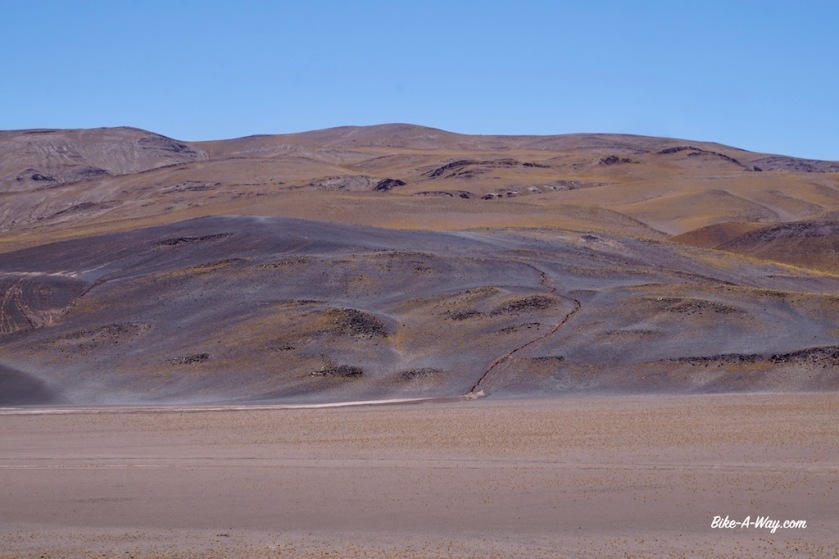 North of the Salar del Hombre Muerto, I have to climb another unnamed pass of 4.195 meter. The road is better for a while but becomes again really sandy and bumpy as the day carries on. As I was virtually on my own between Antofagasta de la Sierra and the salar, now north of this salt plain there is again some traffic of pick-up trucks and big trucks.
None of them symphatic enough to slow down the slightest and leaving me in a cloud of dust every time.
The landscape offers an incredible variety of colors again, with even some sand dunes. 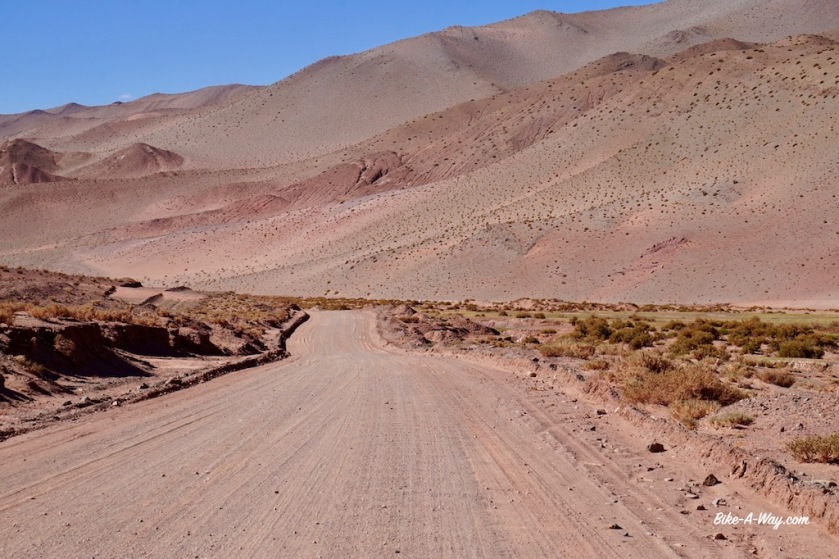 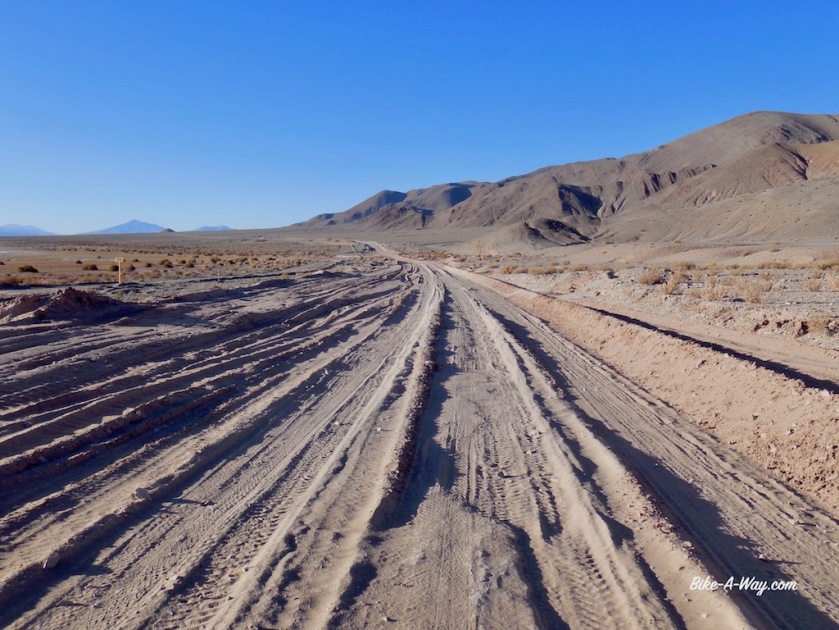 Next day, riding along the salar in a combination of white and red colors, the Volcan Galantop (6.740 m) behind it, I stop for lunch in Salar de Pocitos. Still on ripio road, I climb again to a hill top over 4.000 meter and set up camp for the day looking at Volcan Queva (6.130 m) from the porch of my tent and Cerro del Rincon (5.606 m) on the other side of the tent. 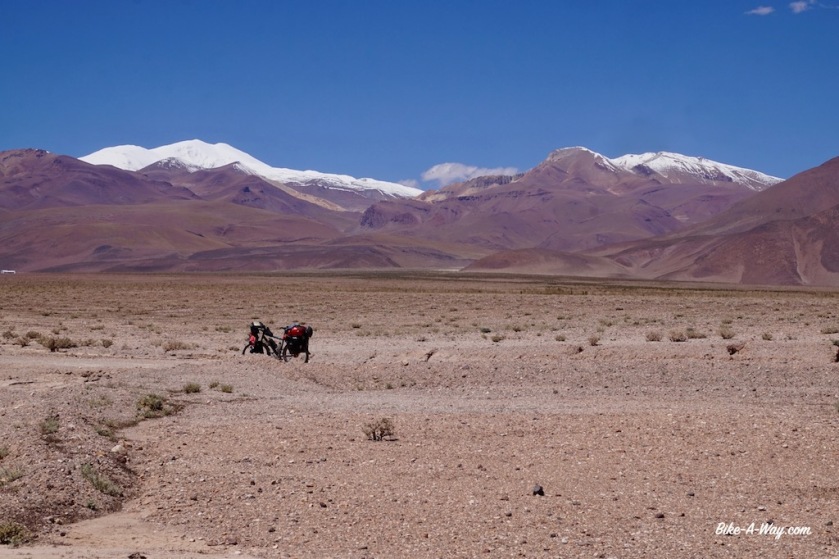 My last kilometers in Argentina are, yet again, along a difficult to ride stretch of ripio and loose sand road along the Salar del Rincon. I met an Argentinean guy on my way up who was invited to stay the night at the immigration post. Also the Japanese cyclist I met in Londres could stay there.
As I had still a lot of vegetables which the Chilean customs would confiscate, I cooked a warm meal at the border post. No shops after the border to stock up on new vitamins.
To my surprise, Frederic arrives as well. I thought he would be a day ahead of me by now.
For whatever reason, we were not allowed to spend the night at the immigration. They send us out at 16:30 hrs, a few hrs before sunset, and with a big climb still ahead of us, the wind blowing like hell from the west. Three kilometer after the immigration, we found some rocky boulders which gave minimal shelter from the hard wind and called it a day.
Tomorrow up and over the Paso de Sico for a final, short stretch in Chile.

Nights slept inside: 11 (8 in hostel, 2 in the refugio Volcan ‘El Tromen’ and 1 at Salar del diamante)
Nights slept outside: 35 (of which 34 wild camping and on in hell-Camping El Festival in Tunuyan)
Flat tires: 3

The GPS track can be downloaded from Wikiloc

Some of my previous trips