The Polish part of my trip, cycling east to west through the country, could be divided into two parts.
The first part, I’ll cycle just south of the Polish / Kaliningrad (Russia) border back towards the Baltic sea, mostly following the Greenvelo Wschodni Szlak Rowerowy bicycle route. It was opened a year ago or so, and appears quiet popular among the Polish.
The second part, I’ll take up the R1 bicycle route, which is a route going from Boulogne-sur-Mer to St. Petersburg.

Poland is bordered in the north by Russia (Kaliningrad) and in the east by Belarus, both countries for which I don’t have a visa. Luckily there is a very small ‘gate’ open for overland travelers, a narrow part where Poland and Lithuania, both Schengen territory, have common borders.

Entering Poland, I have to turn the clock back again one hour and I will pay in Zloty’s for a while. It’s another country I entered via a little, sandy road. Sejny is the first bigger place I visit. Huge cathedral for such a small place. Immediately I see pictures of Pope John Paul II, Karol Wojtyla.
This shepherd of the father of creation is still very popular here.
My first night in the country, I pitch the tent in the forest in Wigierski National Park.

On the morning of my second day in Poland, I first visit Klasztor Kamedulow. 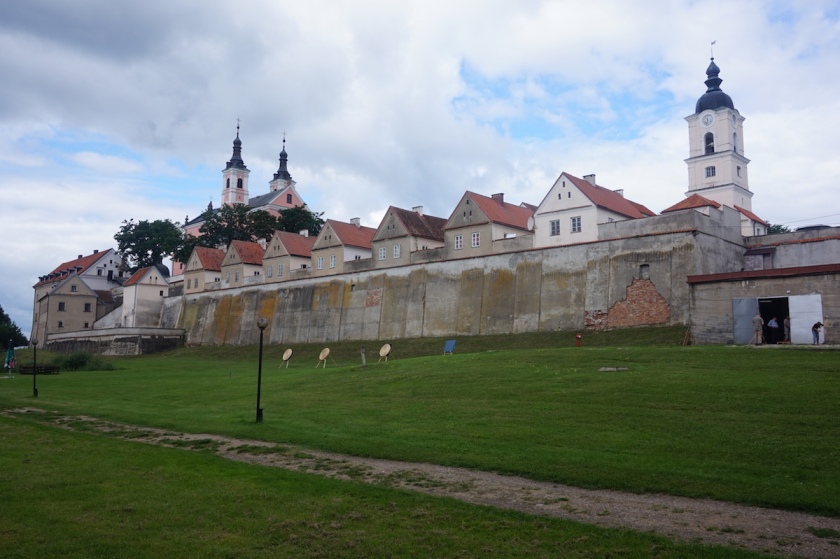 Suwalki, the first real Polish town on my way is quiet famous among Belgian people. It’s the hometown of Waldeck, one of the main characters in the country’s most famous sitcom, ‘Home’.
Waldeck is some sort of Polish Casanova. Many times you see him daydreaming at the bar, drinking his ‘Slurfke’ (= elephant trunk) while he’s having flashbacks about his youth in the forests around Suwalki, the same forest in which I’m riding my bike now.
A trunk is a beer he invented together with his buddies Frank and Eddie. Frank is a top guy. A carpenter who’s a bit conservative. He has a son, Frankie who turned out to be gay, which Frank didn’t take very well. On top of that, Frankie got married to another guy.
As if that wasn’t enough, he had a sex change as well and Frankie is now Kate.
Life is tough on Frank, but still, he isn’t drinking too many trunks.
Eddie, the master brain behind the trunk beer is an ex convict of some sort. He’s always out of money, can’t keep jobs, etc….
All three of them have many problems with their wives.

Anyway, let’s not get carried away here. The Suwalki forests are behind me, and I head back north again through Krajobrazowy National Park, towards the border tripoint of Poland, Lithuania and Kalingrad (oblast of the Russian Federation).
There’s a granite obelisk with a stone circle around it, marking the three territories. Half of it Polish, a quarter Lithuanian and a quarter Russian. There is a very clear notification you are now in the Schengen Zone and it is absolutely forbidden to put your feet on Russian soil. I happily oblige, because I don’t want to get in jail there.
Polish tourist have their pictures taken in front of the obelisk.
When two Russian soldiers approach, the Polish go away quickly. I was still lingering near the thing. The two Russian soldiers walked up to the obelisk (into their tiny quarter).
‘Hi’, I said. But they didn’t reply. One of them looked to the camera on Russian soil from the corner of his eyes. I guess they aren’t allowed to make contact.
What a shame. A friendly word can only change the perception, no ?
After the soldiers were gone, the Polish curiously asked me whether the Russian said anything.
They still seem to make a big impression on them.
I wild camped just south of the Polish-Russian border. Hope Vladimir isn’t going to grab any land overnight. 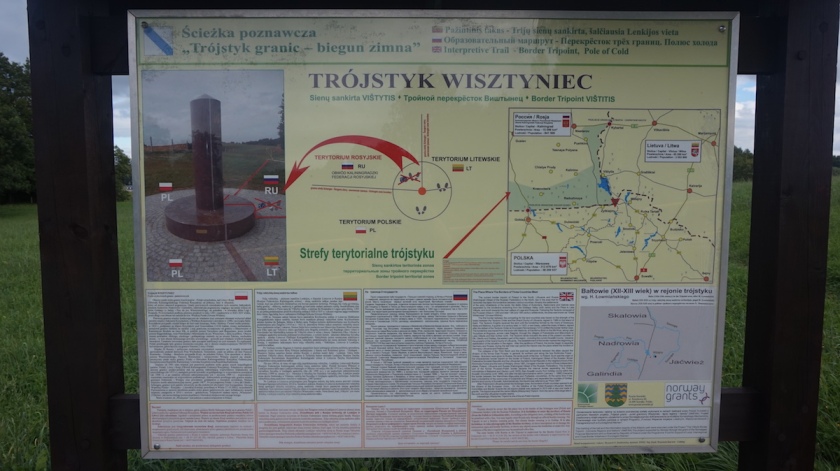 I’m really happily surprised with the Greenvelo Wschodni Szlak Rowerowy route. I’m following quiet roads and a lot of sand roads. Little washboard sometimes, but way better then what I had further north in the Baltic States. There are lot’s of stops with information signs (exclusively in Polish) and these rest areas have many times a bike pump and equipment for repairs. At the few places where you cycle along a main road, there’s a separated bike lane. Thumbs up for Poland here. 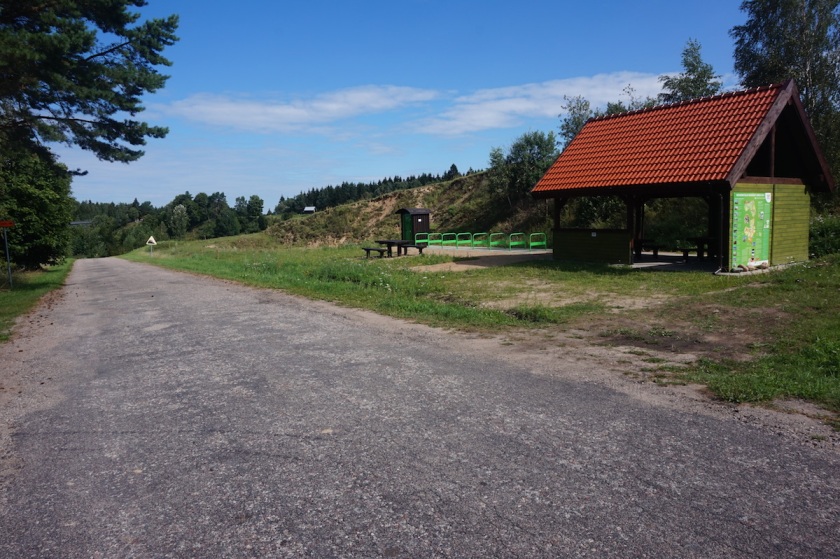 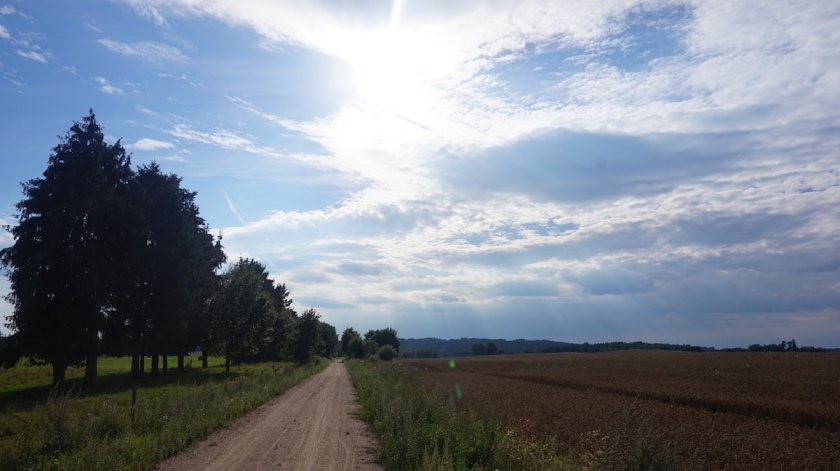 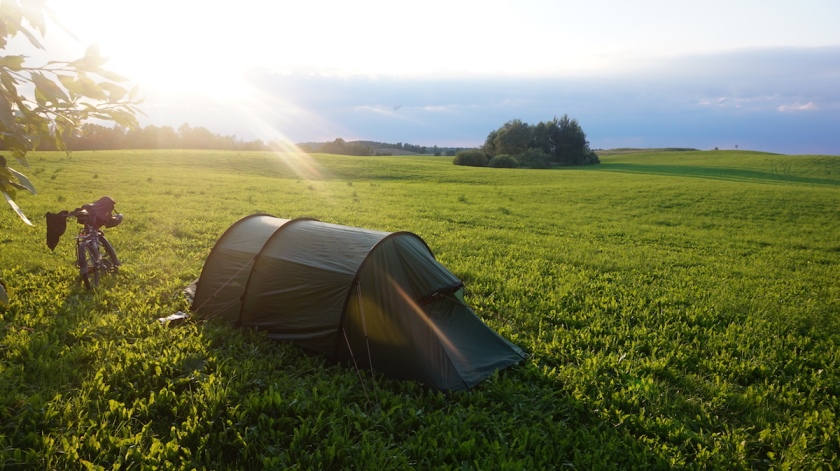 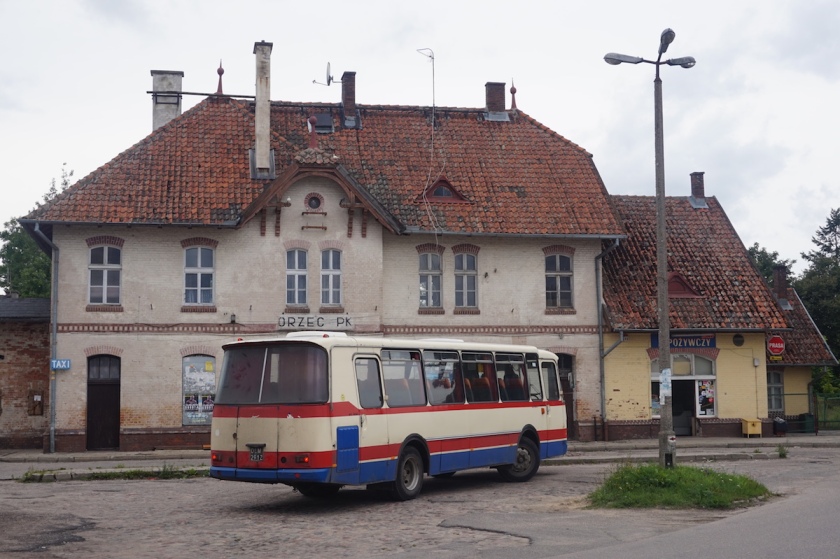 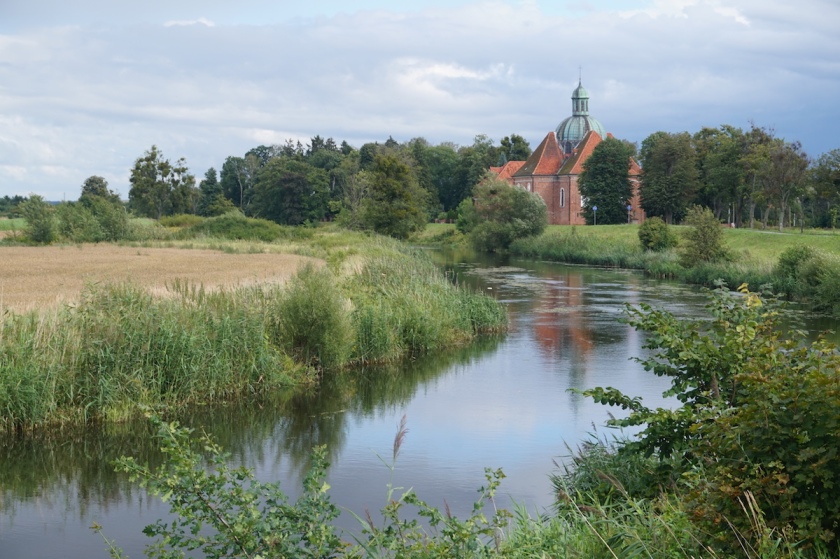 A little bit north of Frombork, I reached the Baltic Sea again.
I decided to stay at the camp site in Frombork (noisy one !), because I wanted to check out the town a bit the day after. This is the place where Copernicus spent the last 20 years of his life. You can see part of his coffin through a glass tile in the town cathedral.

Later that afternoon, after I just turned inland again, a small green car stopped next to me while I was cycling up the hill.
“Do you know the distance to Tolkmicko ?”, an obese, North African or Turkish guy asked me.
“I don’t know, I’m not from around here”, I replied.
He mumbled something more while I was stumbling up the hill, but he had to accelerate as another car almost drove into him.
Hundred meters further on, he parked on the side, waiting for me.
“Allez, now we’re gonna get it”, I thought.
“Hey my friend, come over !”
If a stranger calls me ‘friend’, all his chances of becoming one evaporated already.
“Do you know the distance to Warschaw ?”
What the fuck is wrong with this guy ? Do I look like a Garmin ?
“No, sorry”.

Damn, if the next thing he’s trying to sell is his car, then this guy succeeded in offering me the three things I hate the most in one minute time. Material things that is. I hate a lot of other stuff too 😉

I was getting bored with this, so moved my bike back to the road to continue cycling.
“Give me 30 euro my friend, for fuel”.
Yeah, right.
“20 euro !”, he tried once more.
I cycled on. I think this is where our friendship ends.

With all the time I ‘d spend in the morning in Frombork, and later on with my friend, I decided to call it a day before reaching the town Elblag, as I didn’t ant to get stuck in the city late afternoon and finding a camp site at the other side of town.

Elblag is where I start the second part of my route, intending to follow the R1 bicycle route
There’s not a whole lot to see in the city.
To no avail, I tried to find the tourist info, hoping they could tell me where I could buy a new gas cassette for my stove. Signs everywhere to them, and they where in my gps as well, but on the ground, nowhere to be found.
It being a Saturday, I guess they would be closed anyhow.
Tourist offices the world all over tend to close in the weekend, when people are out and about and woud like to get some info.

Another night, just before reaching the Wisla river, I had a nice camping spot in a pine forest. Very quiet and the first night since ages I didn’t hear dogs barking.
But probably my nicest camping spot in the country was the day after, when I camped on the other side of the Wisla River, near a small pond. I could watch to the town of Chelmno on the opposite river bank. It’s 3 churches nicely lit all night. 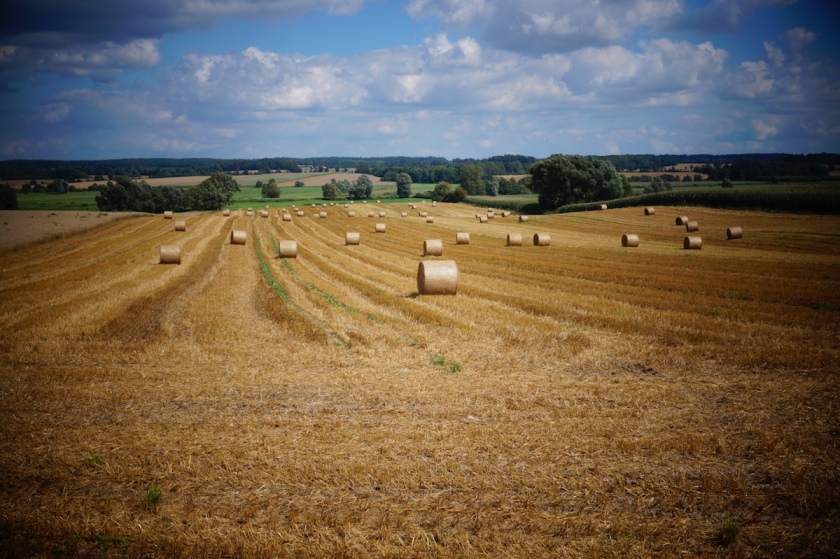 Monday 15th of August, all shops were closed, because of a Catholic holiday, or so it appeared.
This was of course the very first time since the start of my trip I had only 2 small slices of bread left and nothing for diner. Only a bit of spaghetti and rice, but no vegetables, no sardines, no Sri Ratcha sauce, no soup, nothing…
The 2 slices of bread I ate for breakfast (not realizing yet the shops were closed).
At km 10 I was starving, as always.
The only thing left was a 200 gram bag of trail mix.
“Ok, one nut or one raisin every kilometer”, I thought.
That went fine actually and the kilometers went by quickly, concentrating on my one nut, every time a km had gone. (Sometimes I cheated when I was really hungry and took an extra nut or raisin after half a kilometer).
After 29,55 km, I was saved. I saw a few drunks in front of the local ‘Klep’ (= small local shop).
I had decided this morning in the tent to reduce my milk intake, because it makes me fat, but to celebrate my good luck, I bought a liter and drank it instantly. No banana’s, no apple, no paprika in the shop.
“Beer ?”, the lady asked.
Oh God …..
I bought some mackerel in tomato sauce. I could decide later one whether to eat them with rice or spaghetti.

But also that turned out to be no point.
When I drove through the little town of Mrocza around 4 pm, I saw a small take-a-way pizzeria. There were a few tables inside, so a pizza it was today. For 20 Zlotti (5 euro), I had a pepperoni pizza and a can of Pepsi.
While eating the thing, one after the other local entered the small business, without ordering anything. They just looked at me. All of them seemed to have a skin disease, literally all of them.

I hope that’s not from the pizza’s here.

Soon after, I felt terrible. I was swaying on the road like a drunkard. Not a good idea, if many of the car drivers passing you actually are drunk.
I vowed not to eat any of that junk anymore in the year 2016.

Initially I was quiet satisfied with the R1 route, but as I cycled further west, more and more I cycled over big, busy roads. I become a grumpy, unhappy person when cycling that kind of roads, so again I sat down one night in my tent and started drawing a route in Garmin Basecamp.
You never know what you’re gonna get if you gamble on taking the little red dotted roads in that program. I had a stretch of 30 km through very loose sand but once I reached the Warta river, I could cycle along it’s bank, the river on one side, endles fields on the other side. A good sandy track, no traffic. Excellent cycling. 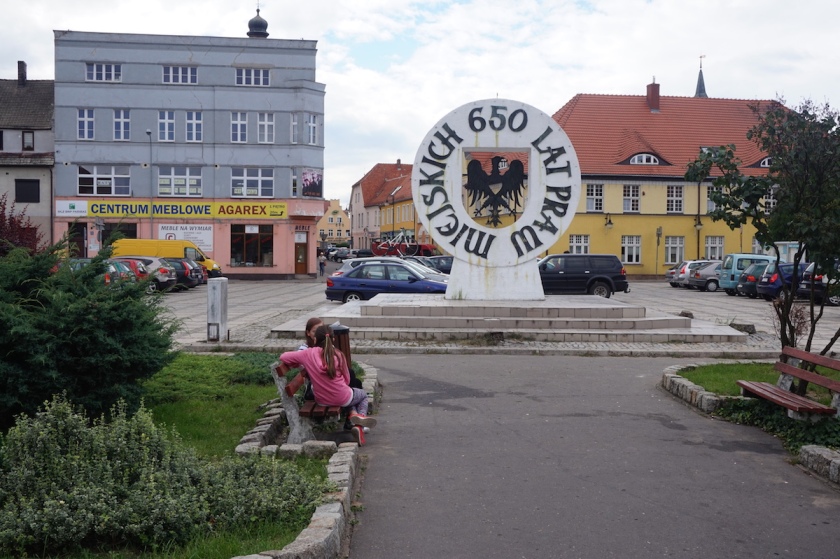 The people remain rather unfriendly.