Estonia, land of the storks

For easy reference, I decided to cycle the Baltic States in alphabetical order.
Arriving with the ferry right in the heart of Tallinn, it will be the first time I plant my wheels behind the former iron curtain.
It’s obvious to have a look at the town first. A nice little city, but I still think the old centres of Antwerp, Ghent & Bruges are much more impressive.

After cycling all the way to the wrong end of town to find a new gas cassette for my stove, I went to a supermarket close to Tallinn City Campground.
It doesn’t get the best reviews, but still, after cycling into Helsinki, finding the right dock from where the ferries to Estonia leave, the ferry ride itself and all the chores in Tallinn, I wasn’t ready anymore to cycle out of town for God knows how far before I would find a descent wild camping spot. Besides, I needed a shower and wanted a bit of free time in front of my tent, reading. So I stocked up in the super market. Meatballs, vegetables, bread, a bottle of milk for next morning and some yoghurt + a big bottle of beer and a bag of chips for tonight. It was a bit wobbly with all that stuff on the bike, but just a short ride.

The campground ……. from half a kilometer away I could here some concert was going on. Right next to the campground.
The campground itself is a concrete parking lot between high rise buildings.
The sanitary building smells and looks like one at the end of a rock concert. An alarm of one of the mobil homes was going of constantly.
Apparently since morning time already, I was told by a German couple.
All these other campers have a lot of patience enduring that all day. I was there 5 minutes and wanted to break it open already….
In short…. it was worse then hell.
And it costs 20 € !
Impossible for me to stay there. Accidents would happen.
I ate the yoghurt, drank the milk and tried to load all the other stuff as good as I could on the bike. Filled the water bottles and left, not before enquiring at the reception whether they had a free space, what the price was, have a good laugh and go.

Late evening, 30 km or so outside of Tallinn, I found a quiet, mosquito infested spot in a field.
Much better.
Prepared the meatballs and ate them in my tent, followed by the beer and chips.

I have the intention to follow the ‘Eurovelo 11’ route a bit through the Baltic states. First along some peninsula’s along the country’s northern shore.
Beautiful riding through virgin forests. To actually see the sea, you ‘ve got to take some dirt roads going down to the coast.

My second night, I wanted to have a short day and stay in one of the RMK campgrounds (RMK = the Estonian forest department).
After a 50 km ride, I arrived at the RMK campground in Leesi.
A bumpy sand road going down from the main road. That looked good and quiet.
Until I was down that road.
Two big groups of Estonians were playing volleyball, car stereo’s at maximum volume, beer all around. Further down a group of Hells Angels was making loud noises with their Harley Davidsons, a group of girls was sitting in front of a tent smoking water pipes (idiots), a family with dogs on the beach….
I parked my bike next to a Harley Davidson, sat down in my cycling shorts at a bench nearby and had lunch.
“Aren’t these guys feeling hot, still wearing all that leather crap”, I am thinking to myself ?
“They must really envy me, in my cool shorts.”
I didn’t bother asking them, cause I constantly had to kick a little dog away.

Driving back towards the main road, I saw another cyclist coming down.
Isn’t that….. yeah, it was John, an English cyclist I met already twice on the Lofoten and again at the campground in Tromso.
What are the odds we meet again in Estonia on a little sand track ?
We had a good talk, before John went back towards Tallinn to take a ferry to Sweden.
I headed further along to coast and pitched my tent in a mosquito infested forest, 30 km further down the road. 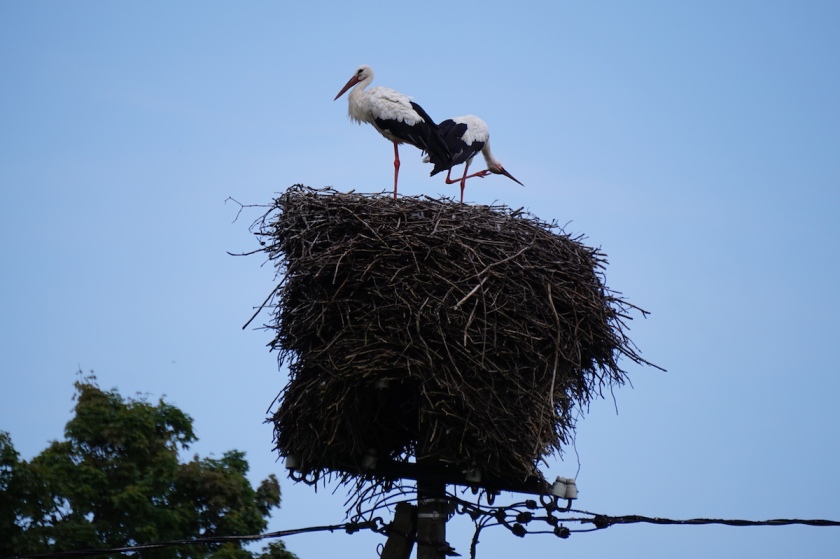 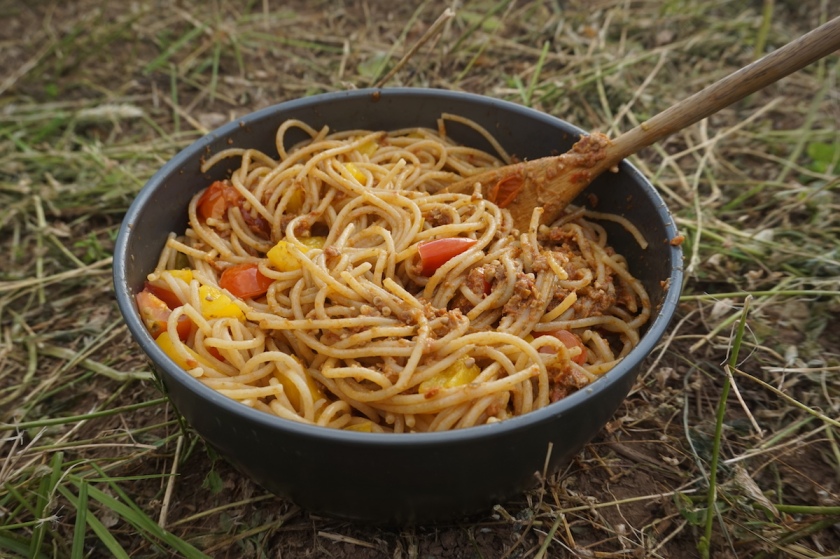 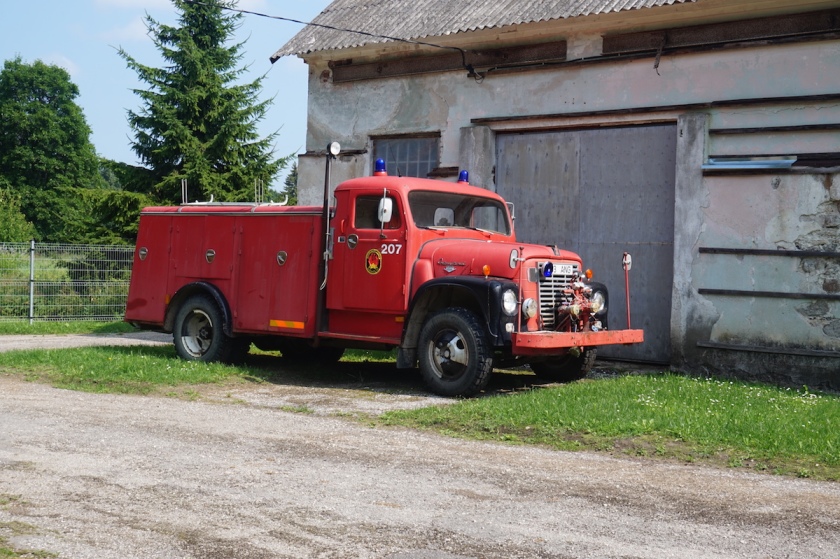 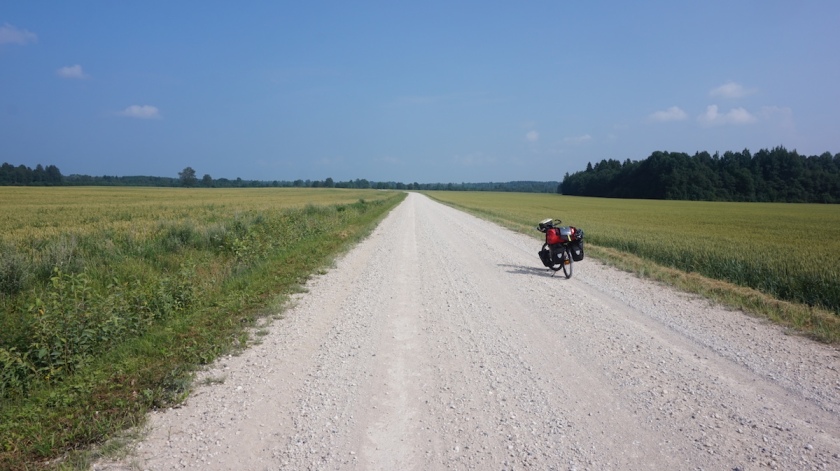 Riding South towards Estonia’s second biggest city, the university town Tartu, the Eurovelo Route started to use bigger roads so I had to intervene a bit and made my own route, using traffic free dirt roads.

Tartu is a nice place, but I was so stupid to follow the Eurovelo route again to leave town.
Busy, busy road.
I made a much, much better route that night in my tent for the rest of the ride towards Latvia.

My last kilometers in Estonia were on a provincial road skirting the border.
Right side Estonia, left side Latvia.
I was heading to the small town Valga but didn’t really want to ride into another town when I didn’t need supplies.
I saw a little road coming in from the Latvian side, but it stopped a few hundred meters from my road. Probably from older times, when border crossing weren’t that easy.
But roads don’t ever stop just like that near another one, I thought, so I kept my eyes open.
And sure, suddenly there was a cemetery on the Latvian side of the road, and a little path going there from my main road.
This is the first time I entered a country via a graveyard 🙂
Not a problem in our happy ‘Schengen world’, I guess.
After the cemetery I continued on sand roads back to the Eurovelo 11 I was following. That turns out to be another paved provincial road. Not too bad when I ride it early evening, but I can imagine it will be busy tomorrow so later that evening I create my own route further through Latvia. 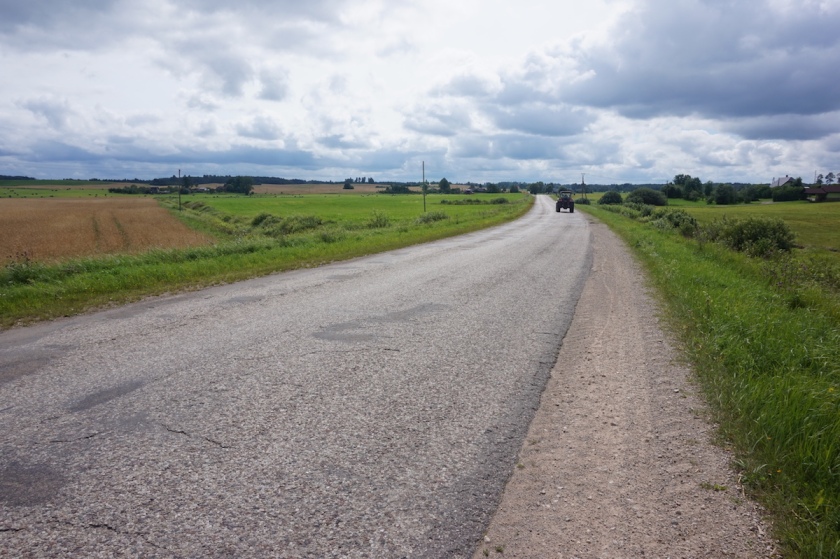 The route I created between Smiltene & Jekabpils turns out to be spectaculair. From gravel roads onto smaller and narrower sand roads right through the heart of Latvia.

Just when I come from a small sand road on a bigger gravel road, a passing police car stops right in front of me.
A big fat guy whit a cigaret drags himself out of the car.
“Kezembrechal zwizwetska norovski embroich ?”
I politely explain him I don’t speak Latvian.
“Ghwhat your name ?” he asks me.
A blanc stare for a few seconds…… “Plovdo Karisteas Sir.”
“Ghwhere you from ?”
“I’m a United States citizen Sir.”
“You tourist ?”
“Sir, yes Sir !”
“This your first time in Lativa ?”
“Sir yes Sir !”
We exchange a few more plaisanteries and soon I am on my way again.
But of course the thunderstorm I was trying to outrun (outcycle ?) caught up with me by now.
It’s a short one though, so soon I can enjoy the now a bit muddier tracks I am following.

If you like your cycle trips a bit more adventurous and like to see little frogs of 2 cm jump from before your wheels, instead of you trying not to get under the wheels of speeding cars and trucks on the busy roads, this is a route for you.
Sure, you’ll have to face a few dog attacks on these little roads, but it’s definitely worth it.
I’ll put the gps tracks online when I’m back home. 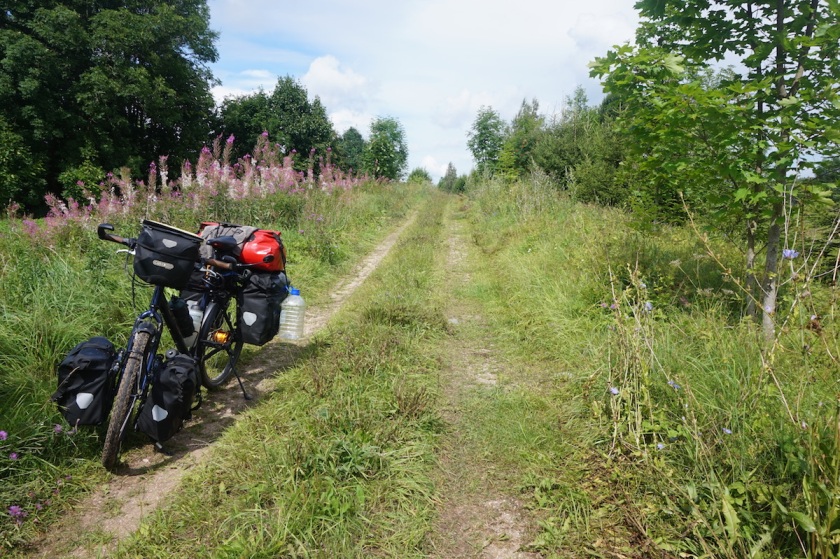 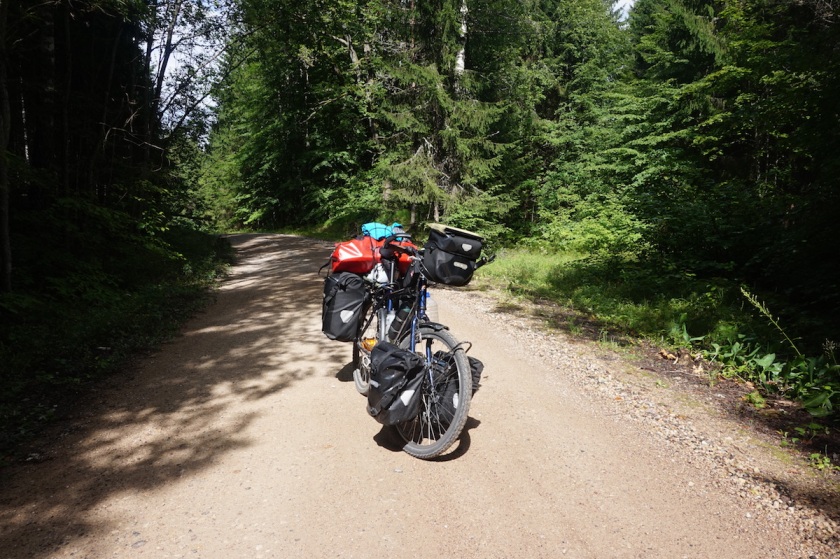 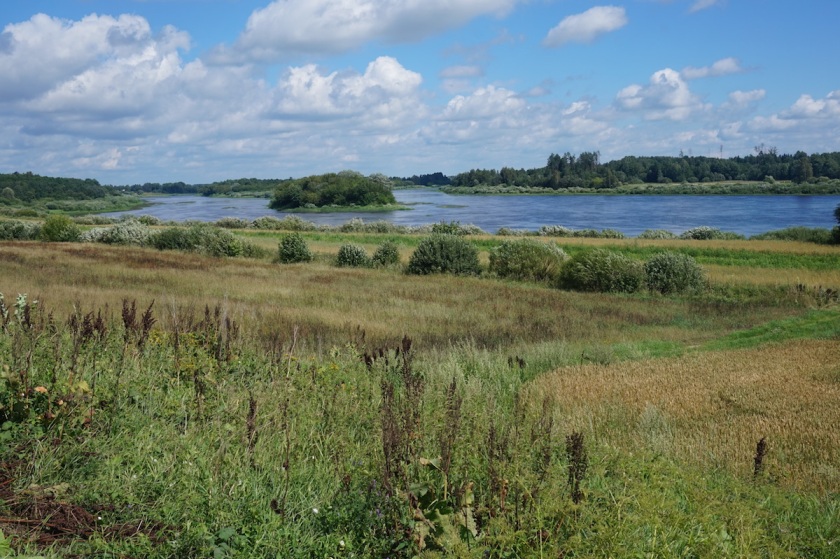 Lithuania, the third and largest of the three Baltic States. It seems also to be the most religious of the three. Small villages with big churches and lots of crosses along the road.
As good as my sand- and gravel tracks were north of the grimly town of Jekabpils (Latvia), so bumpy they suddenly became south of that town. And they continued to be like that throughout Lithuania.
After the little border town Obeliai, I leave again the provincial roads and take a left turn towards Kriaunos. The sun is out, so I have again a swim & a wash in a lake and also find myself a beautiful camping spot next to another lake.
But from the next morning on, the weather becomes dodgy and I pack the tent away wet most mornings.

Bumping over washboard roads, 3 bumps a second, a strong head wind and a regular rain shower. 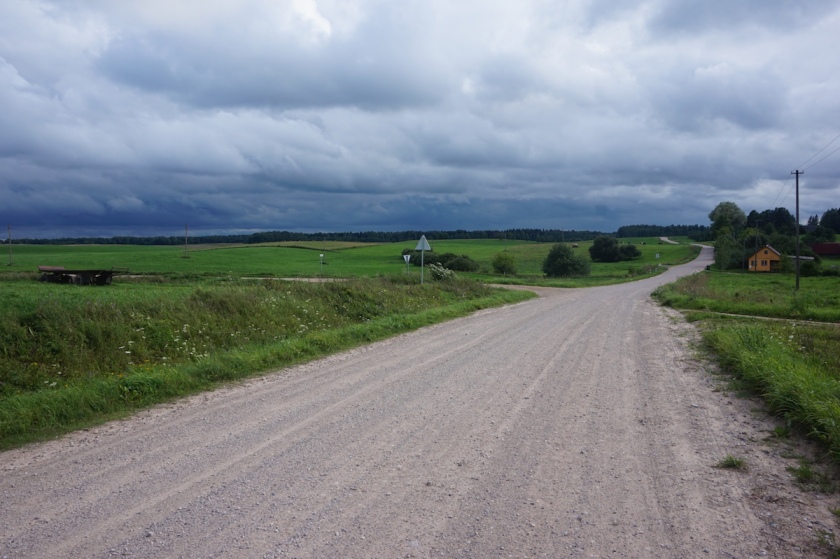 70 km north of Vilnius I take a rest day on ‘Apple Island’, a camp site on a little island in lake Grabuostas. It’s my first rest day since Tromso, exactly 3746 km back & 43 days ago.
It’s not that I didn’t want to take any rest days, but the circumstances decided otherwise.
Or there were no campgrounds around near the end of a cycling day, or I didn’t have enough food or water to take a rest day on a wild camping spot, but the main reason was the weather and the insects. The insects forcing you to keep moving, or they would attack you. And as I had such good weather further north, it gets way to warm in a tent to possibly stay inside all day.

During my stay on Apple Island, I treat myself with some good meals from the restaurant to have a change from the usual pasta or rice dishes I make myself. For the first time in my life, I start reading a book in German language, “Amerika von oben nach unten” from Tilmann Waldthaler, one of the ‘big three’ in World Cycling touring, together with Heinz Stücke and Frank Van Rijn.
The book is only available in German, so I didn’t have any choice. I understand everything surprisingly well, so I can buy his other books as well.

A bit before Vilnius, I start following the Eurovelo 11 Route again, which leads my into town through a beautiful forest and a bicycle path along the river. The ride out of town is on a bumpy foothpath along a very busy road. I suppose there was no alternative.
The 5th of August must have been the warmest day on this trip so far. The sun was burning relentlessly and made me stop at every village store for refreshments.
In this little village store, one can see that wodka is still one of the main commodities over here. With all the problems coming along with that probably.

My last day in the country, I woke up around 6 am. The sky was very grey, so I decided to break camp quickly and go. The first 15 km were slow going along more bumpy wasboard roads.
When I went to the village store in Perloja to buy my (almost) daily liter of milk, all hell broke lose. A terrible thunderstorm and an even harder headwind as before. But I was happy with my decision to rise early. The tent was packed away dry, I managed to leave the field I was camping in with dry feet, and the bumpy dirt rod was behind me as well.
The nasty weather prevented me from following the planned route along the border with Belarus through Dzukios National Park though. It would get way too hard on the sandy (muddy) roads in these conditions.
It shortened my route with 60 km, and that way I entered Poland on August 6th, a day earlier as expected.

A few thoughts after this chapter of the trip: 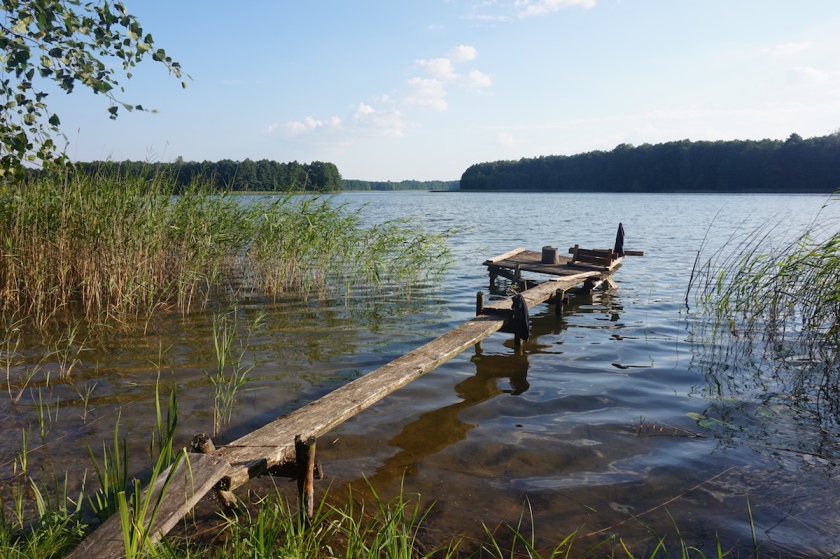 I’ll insert from now on some extra data about my trip after I crossed a country. I updated the previous posts as well (few things I still have to calcuate).