Initially, the Via Lemovicensis has two possible varieties: a northern one via Bourges and a southern one via Nevers. Looking at these options, as always, I could not decide which one to take, so, as always, I decide to do a bit of both. I start on the northern section, allowing me to ride to La Charité-Sur-Loire. From here, I can take a hard option, the GR654 towards Nevers, or an easier option along the Loire River. This way, I think I will see the best of the northern and the southern options on the Via Lemovicensis. The off-road tracks I’m following are marvelous, but there’s some pushing to be done. 16% up, towards La Charité even 26% down….
A little stretch of about hundred meter was overgrown with thorns and fallen trees but mostly it was super pleasant 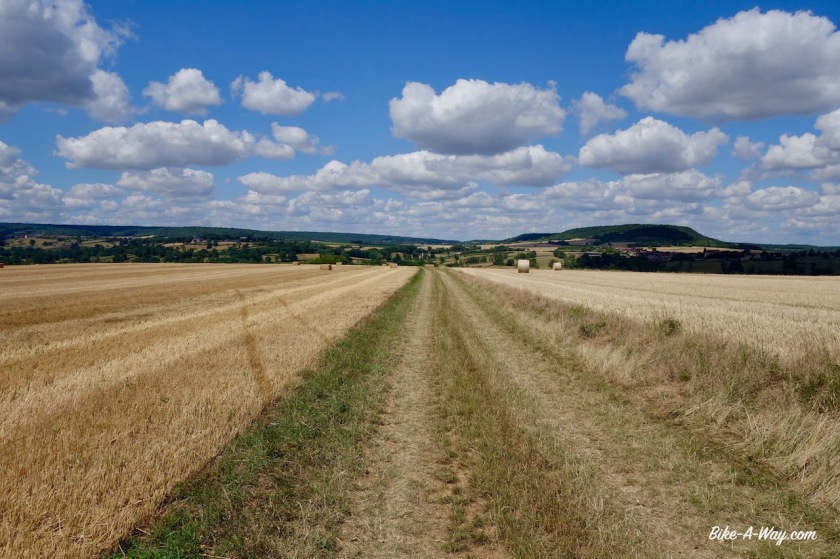 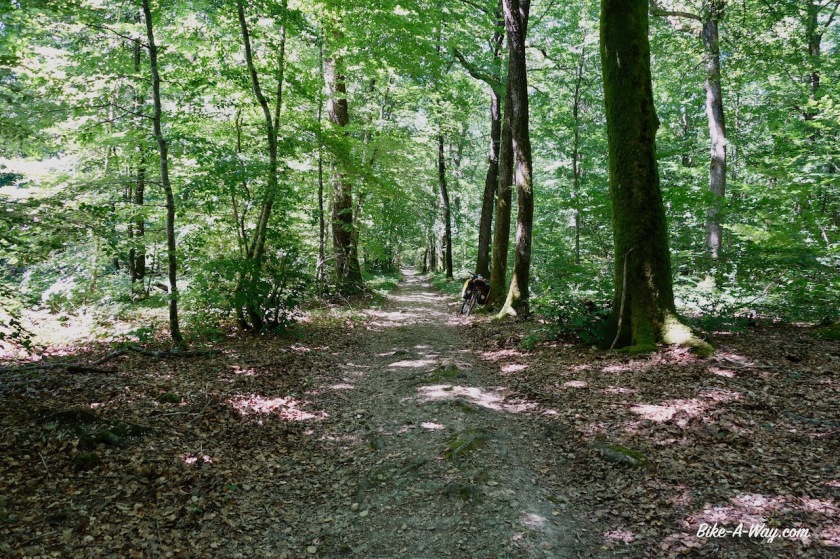 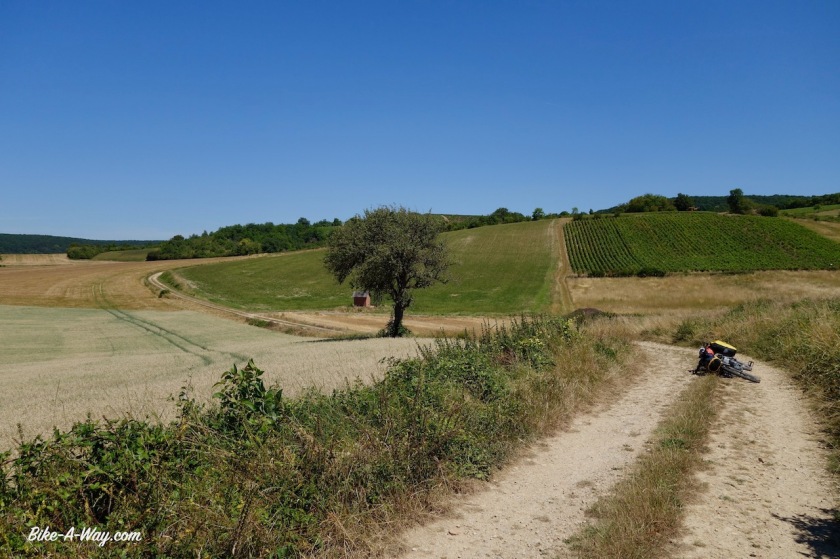 After La Charité-Sur-loire, I could ‘ve taken the bike paths along the Loire River towards Nevers, but I rode these already in 2017, so I took the track through the hills.

After a visit to Nevers, my route followed a dirt track along the southern shore of the Loire river until I reached the ‘Canal Latéral A La Loire’ and the spectacular bridge which leads this canal over the L’Alier River just before it’s confluence with the Loire. It’s here my current route intersects with my ride through France in 2017.
This time, I headed to another canal, the ‘’Rigole d’Alimentation Des Lorrains’ which runs parallel along the L’Allier. Soon, I reached the tourist village Apremont-Sur-Allier. The whole town, but one house, belongs to the owner of the castle. He built the whole village in the same style and it is now on the list of one of the most beautiful villages of France.
Also the forest through which I ride for several kilometers after the village, belongs the the master of the castle.

I soon reached the Canal du Berry. This canal is not used anymore and at some places, between certain locks, completely dry.  At other places there is plenty of clear water, perfect for an afternoon swim.
There’s no paved cycle way alongside it, but most of the time the riding over the grassy borders is pretty good. After Sancoins I met a Belgian hiker from East-Flanders who walked every year a bit of the Santiago Way, this year from Vézelay to Limoges. 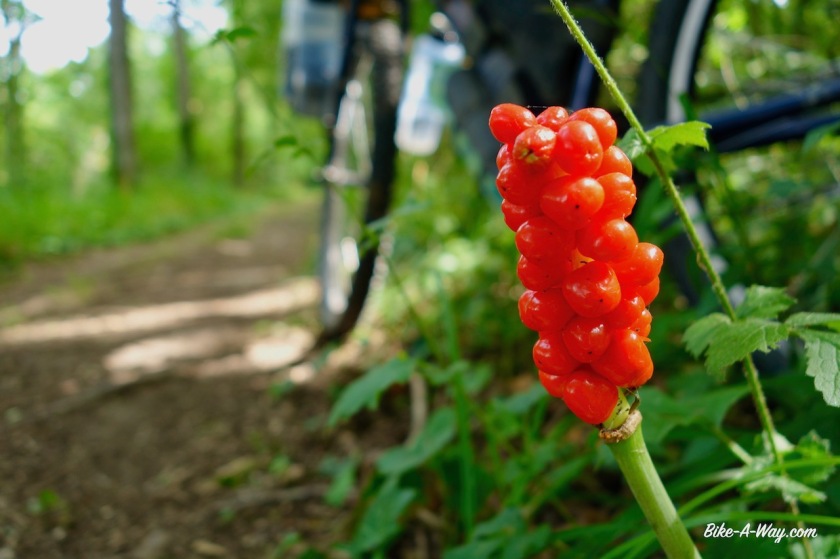 Next day, before Le Châtelet, I passed another Belgian hiker, this time from West-Flanders.
After Le Châtelet, it starts to get a bit hillier again. The last days have been cloudy, with a few drops of rain Actually perfect cycling weather, around 20 degrees C. But the legs feel tired. Still the result of six months living life as an office clerk, I guess. I ride shorter days of 25 and 45 kilometer. I’m not in a hurry and better to give the body some time to adapt again. 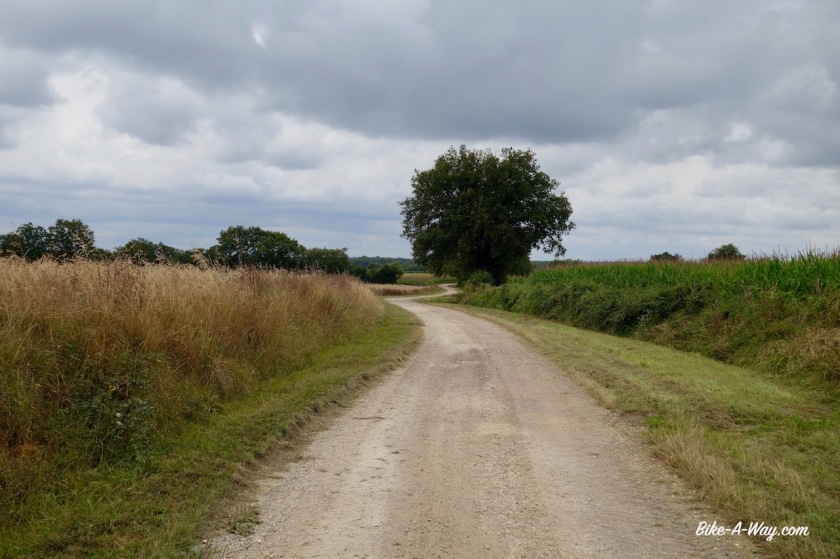 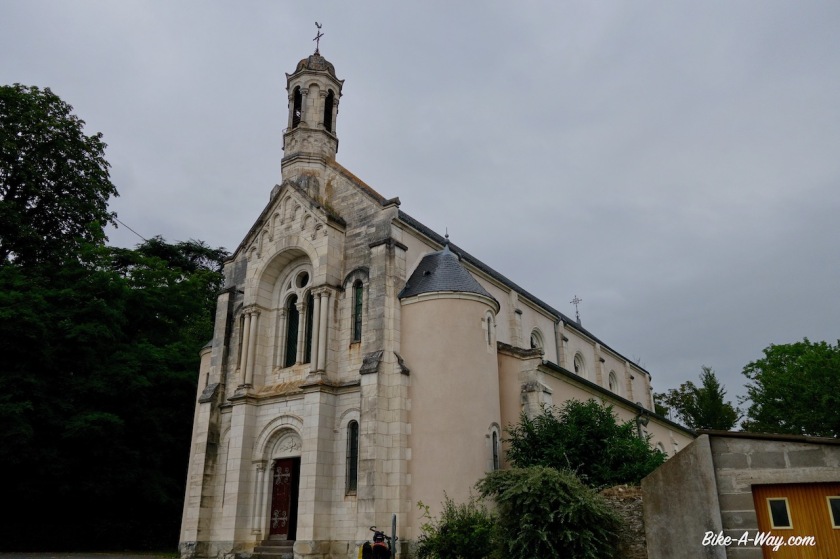 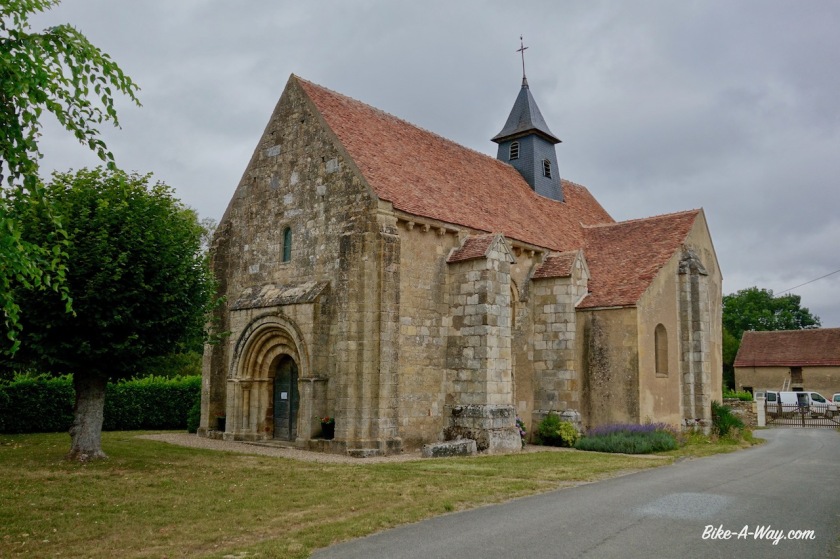 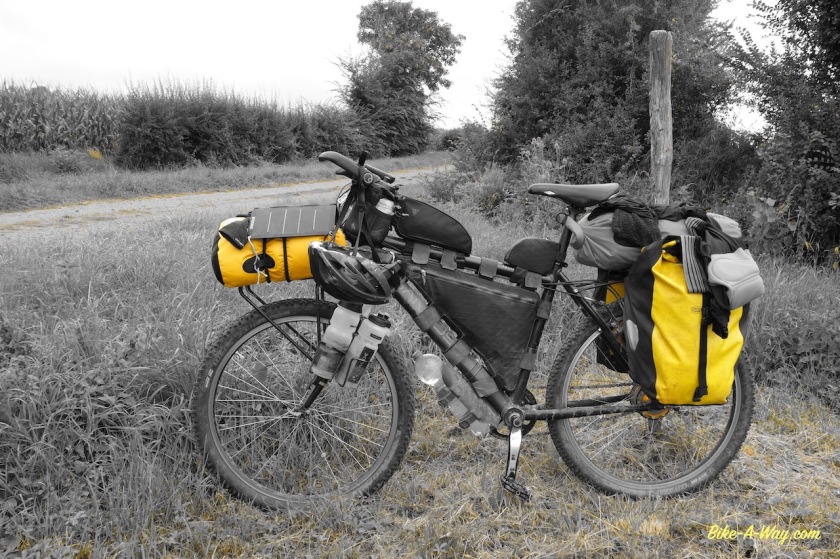 La Châtre (département Indre) was bigger as expected with some nice old buildings, well stocked super markets and a very friendly and helpful tourist information. I considered for a moment staying in the city, famous for having Chopin walking around with his girlfriend George Sand. There’s a whole museum about that in the donjon of the town.

The advantage of being on a ‘historical pelgrim route’, is that it’s steeped in history and you reach it via the smallest ways. On this day, I visited the special church Neuvy-Saint-Sépulchre, built in 1045 on the model of the Holy Sepulchre church in Jerusalem, the castle ruins of Cluis, I rode over the immense, old railway bridge outside Cluis before arriving in Gargilesse, another old, attractive village where the northern and southern lines of the Via Lemovicensis join again.
The steep climb out of Gargilesse is just a start of what’s to follow (climbs and descents in the range of 12 to 15%). 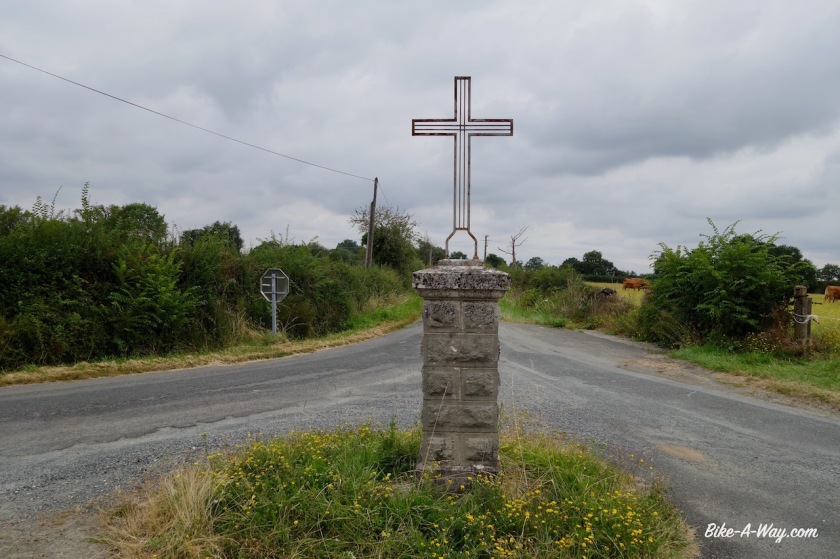 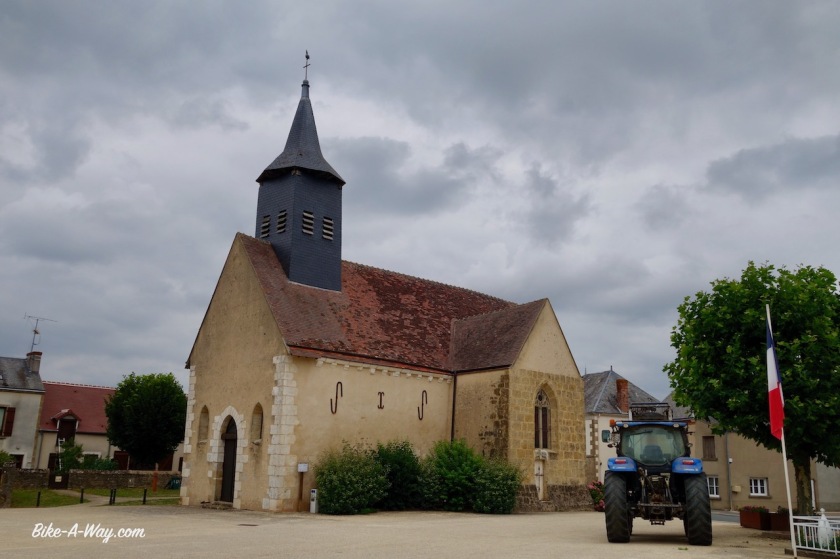 In Cuzion, I kept following the hiking trail, but it would be better to take the D45 here, because… well, the hiking trail is a real hiking trail here, steep down to the borders of La Creuse river. Between Eguzon and Crozant (département Haute-Vienne) is another hard stretch through the forest where mosquitos are eating me while I push the bike up the ridge again. 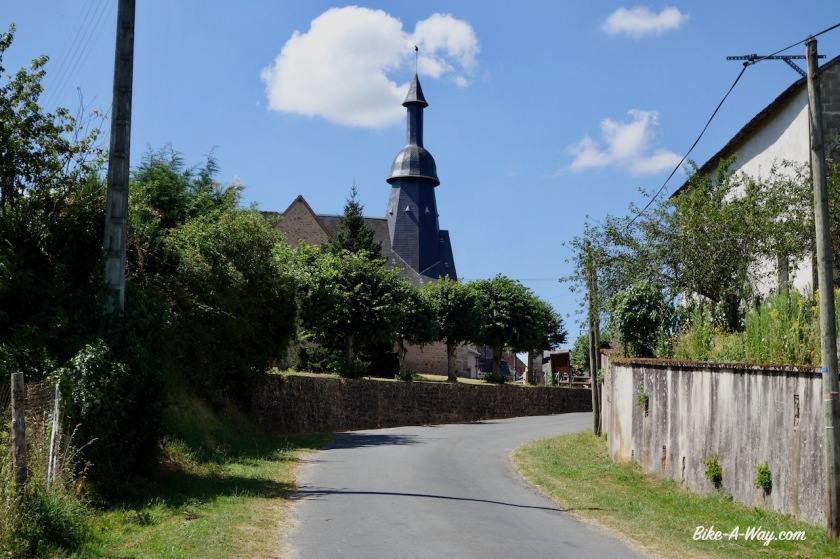 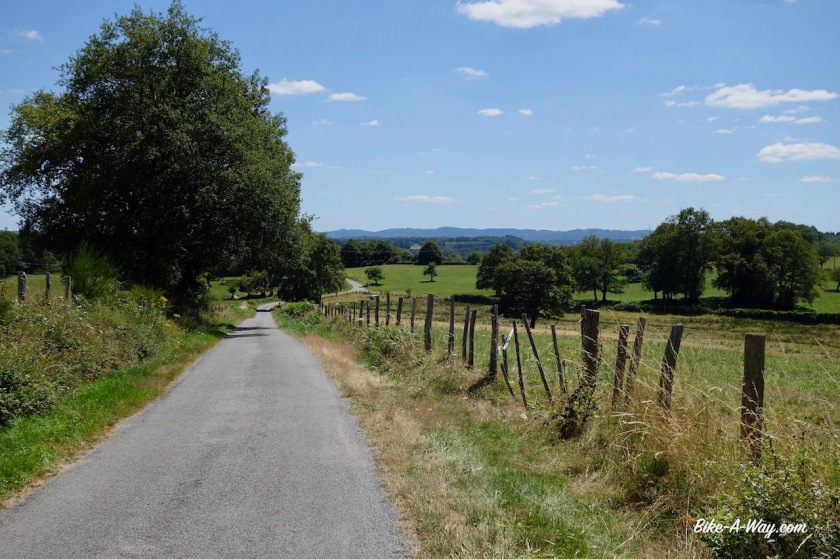 Slowly I’m riding into the Limousin region. At the town of La Souteraine I went to the car wash to give the bike a quick cleaning. It looked awfully dusty from riding the past weeks on trails. You couldn’t even read the brand name anymore. At the church in the next village, Saint-Priest-La-Feuille, I met two Chzecs who were hiking from their home country to Santiago de Compostella. But as a virus delayed their departure, they had to take some trains already.
In the small hamlet of Chamborand I sat in the church for 1,5 hours. One may think “what on earth is happening to him that he retreats that long in a church on such a beautiful day ?”.
But, my reasons were more earthly than spiritually. I happened to find a plug in the church, and I needed to recharge the laptop, shaver and give the powerbank a little push, as it was emptied the last days and without sun, a solar panel doesn’t charge too much.
The same day, I still rode on and visited the 12th century Roman church église Saint- Barthélémy in Bénévent-l’Abbaye

Saint-Goussaud is the highest point on the Via Lemovicensis. On top of the hill (670 m asl) stands the ‘Lanterne des Morts’ That same day, in the church in Saint-Léonard-de-Noblat, I met two Belgian hikers and a Belgian cyclist, both on their way to Saint-Jean-Pied-de-Port.  Have Belgians become the only international travelers nowadays ?  (or are we all fleeing a staggeringly badly run country ?)

The Belgians were going to stay in town. I rode out to find a quiet spot somewhere. Riding into Saint-Léonard, you see from the top of the hill already the valley down below with the river ‘La Vienne’, and the next hill you inevitably have to tackle. These heights are not spectacular, say 200 meters, but either I am in a terrible shape, or it is getting old(er), or it’s something else, but I suffer to tackle the hills.
Hope it will improve. 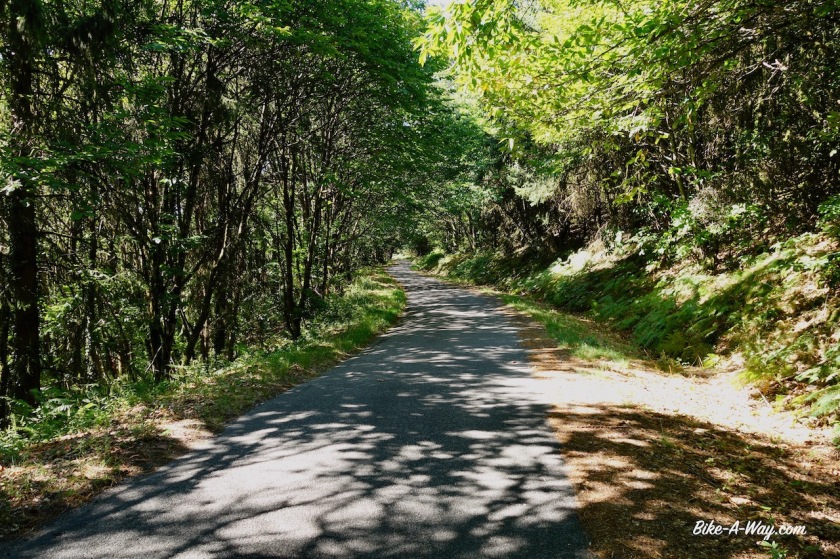 I skip Limoges. It’s a rather big town and I can’t imagine it ‘d be fun to ride in and out of it. Instead I take small roads and tracks going through places like Solignac and Meilhac to Lavignac, where I’m back on the route. After Chalus, a small town with a few ruins, I am riding on one of the best stretches so far. A few steep sections where I need to push, but a lot of riding is on good tracks through the forest all the way to Périgeux. I left the Via Lemovicensis a bit before town, because it uses big roads.  I go a bit south, towards the L’Isle River, then along a voie verte into town.  Nice town, by the way, Périgeux (capital of département Dordogne in the ‘Périgord Blanc). 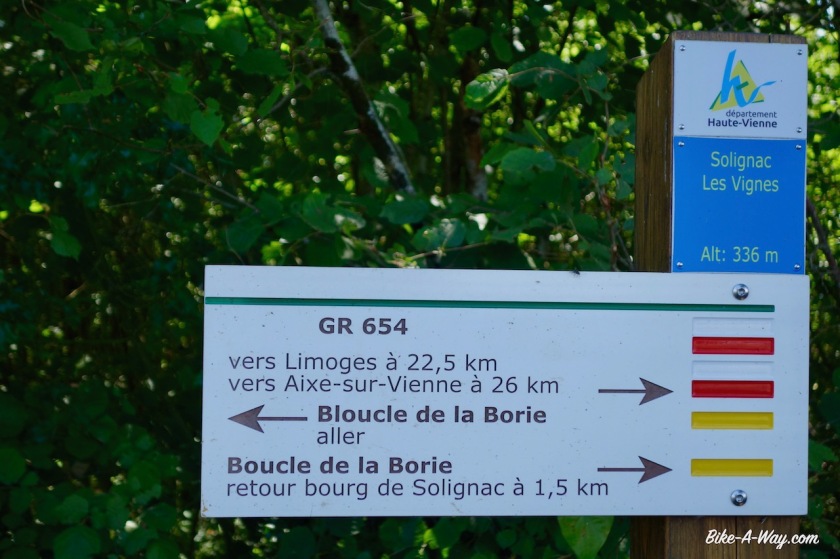 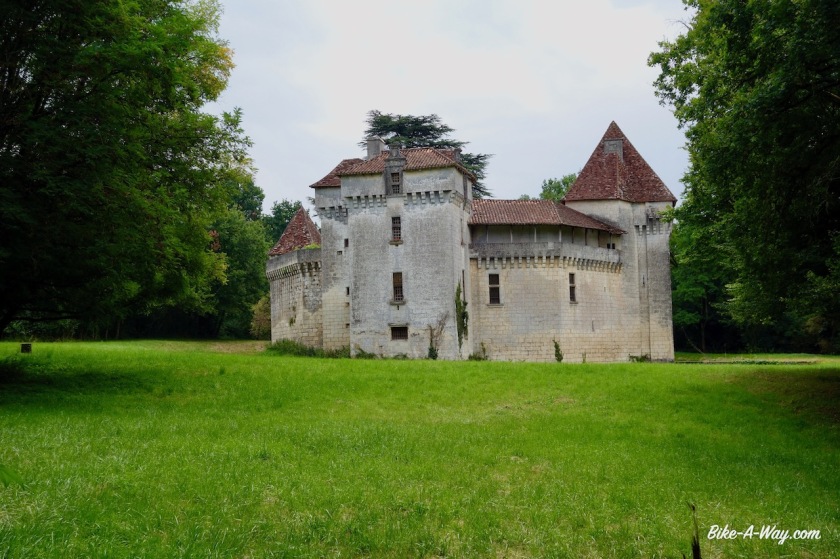 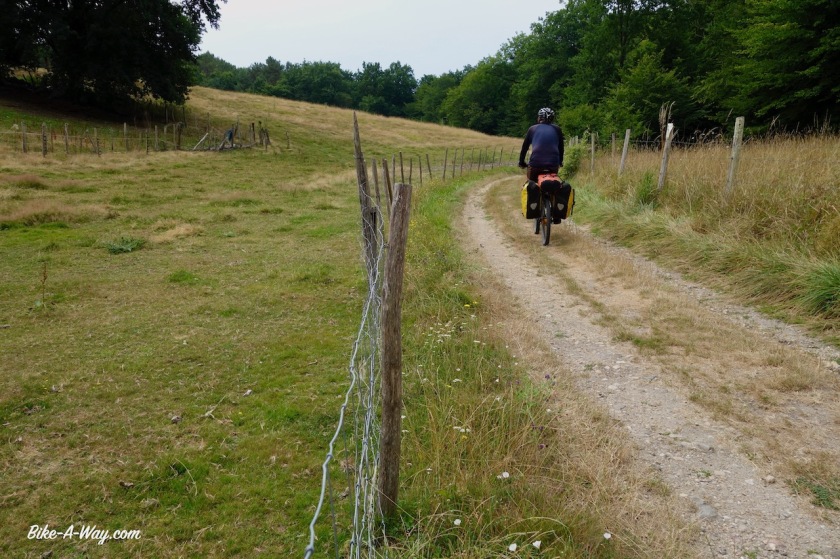 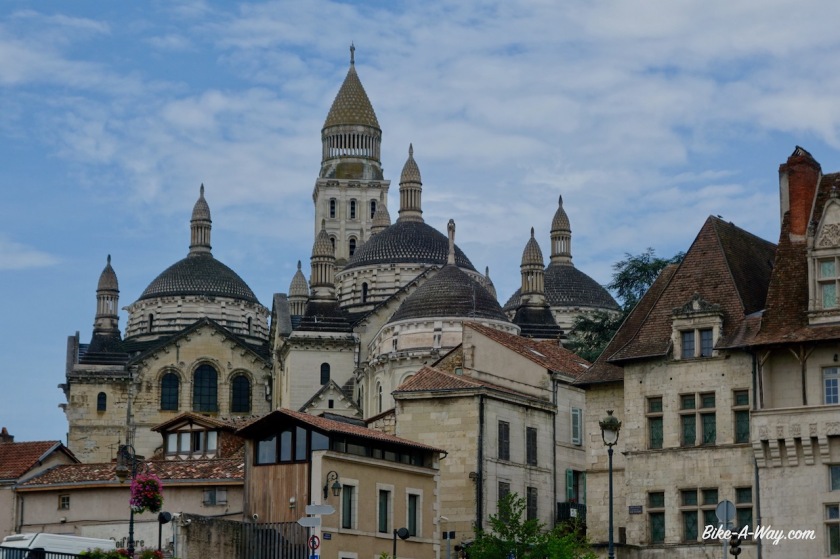 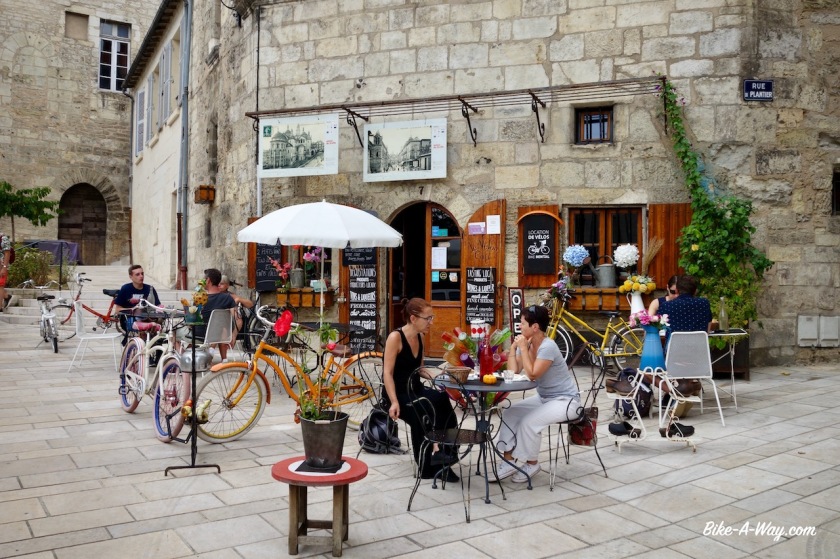 The Via Lemovicensis goes straight south from Périgeux, but I choose a lesser used track, a bit further west, because it avoids the asphalt more. It turned out that lesser used also means more difficult so I was alternating a bit between my planned route, and options on bitumen. I couldn’t really alter the route in the gps, because the gps didn’t want to connect with the laptop anymore. I am very careful nowadays to buy only stuff with usb/micro usb connections, to avoid a plethora of cables, but the gps is still mini usb. In Bergerac (very nice town !), the fourth shop I visited finally had one (1 !) mini usb cable left.

I rode the steep climb up to Montbazillac, sat myself somewhere in the shade and started fine-tuning my route through the Landes. Three hundred kilometer with only 2.800 meters of climbing towards the border with Spain.

Where I rode the last weeks a lot between grain fields, south of Bergerac, the vineyards were back again. Bergerac is a famous wine region on it’s own, and I’m not too far from Bordeaux either.
It’s not only vineyards, but also quite a lot plum trees I see here. 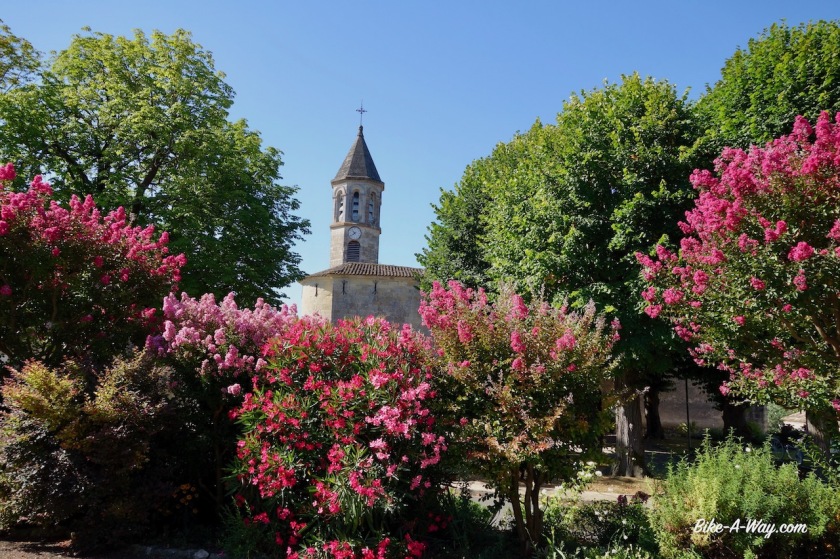 At La Réole, I crossed the Garonne River. A bit further south is the Canal Latéral à La Garonne. For a couple of dozen kilometers, I’m now riding the same tracks that I rode in 2018, when I was on my way from Barcelona to Bretagne.
After the town of Langon, I Ieave the river behind and turn more southwest, riding the ‘Piste cyclable Mios-Bazas’. I rode the whole thing in 2018. It’s really good. You can smell the fresh sea breeze already, mixed with the smell of the pine trees. 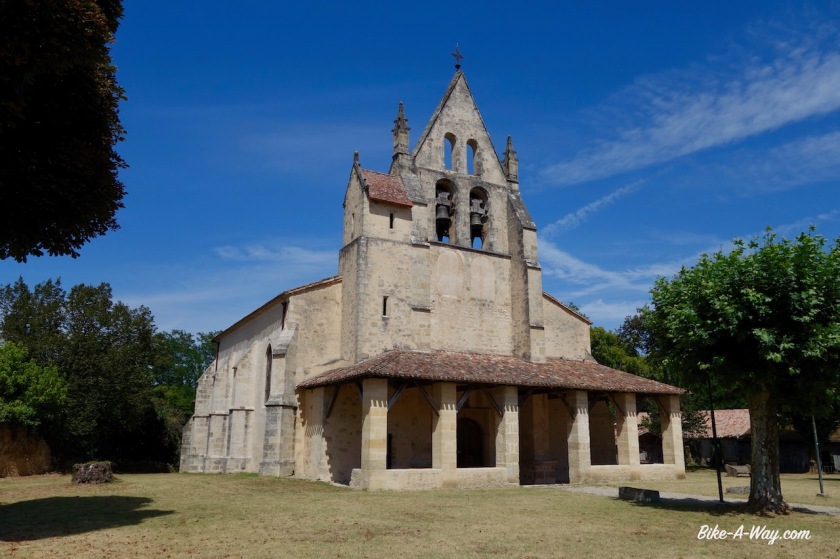 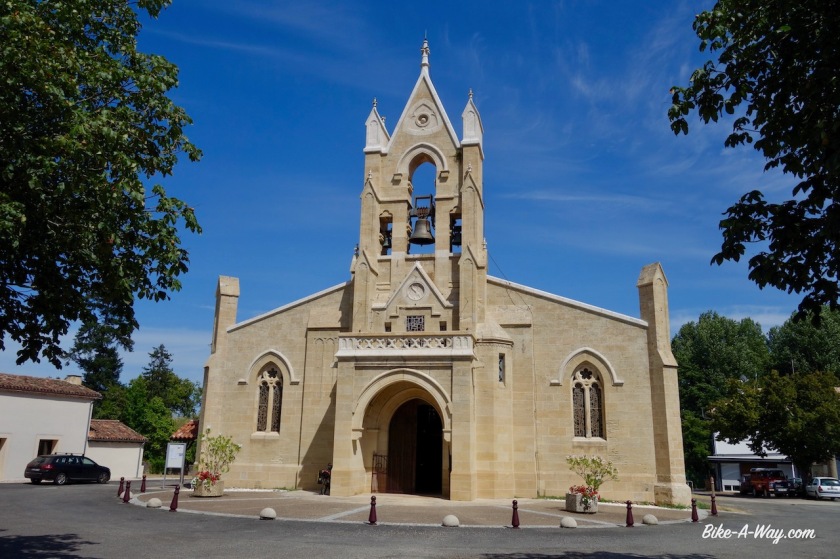 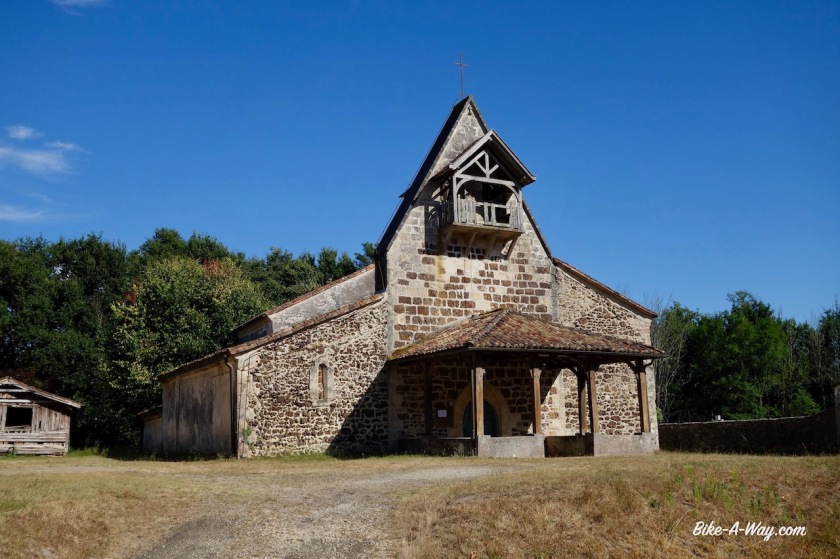 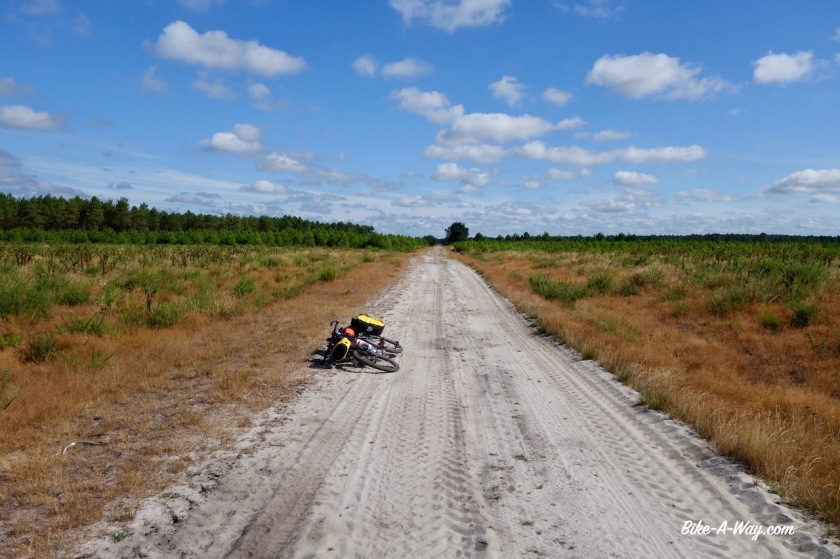 After Léon, which attracts plenty of tourists for the nearby lake, I’m riding on the Vélodysee biketrack. It is crowded, but still ok. As you get nearer the coast, the biketrack leads just along a very, very busy road with a constant stream of traffic, before going into the the Atlantic Coast hell hole of Capbreton. It is terrible and apart from a few short stretches before Bayonne, things won’t improve anymore. But I knew this was going to happen. Head down, control the nerves and push thru it.

Once I’ve left Bayonne, There’s another car free bike trail along the “Nive” river and all is good again. I tried to find the smallest roads and track to the border, but sometimes I had to go on route départementales. It is astonishing how much traffic they carry. It’s like all the world wants to be in the little hill towns like Espelette or Sare. After Sare, quietness rules. Slowly I climb to the pass which will bring me over the Pyrenees and into Spain. For a handful of kilometer I am riding the same trail as I did when I rode the Transpirenaica in 2014.
Just beyond the border I find a good spot to pitch the tent for the night. The hills around me, the sky turning red as the sun sets, an almost half moon above the mountains….all is good. 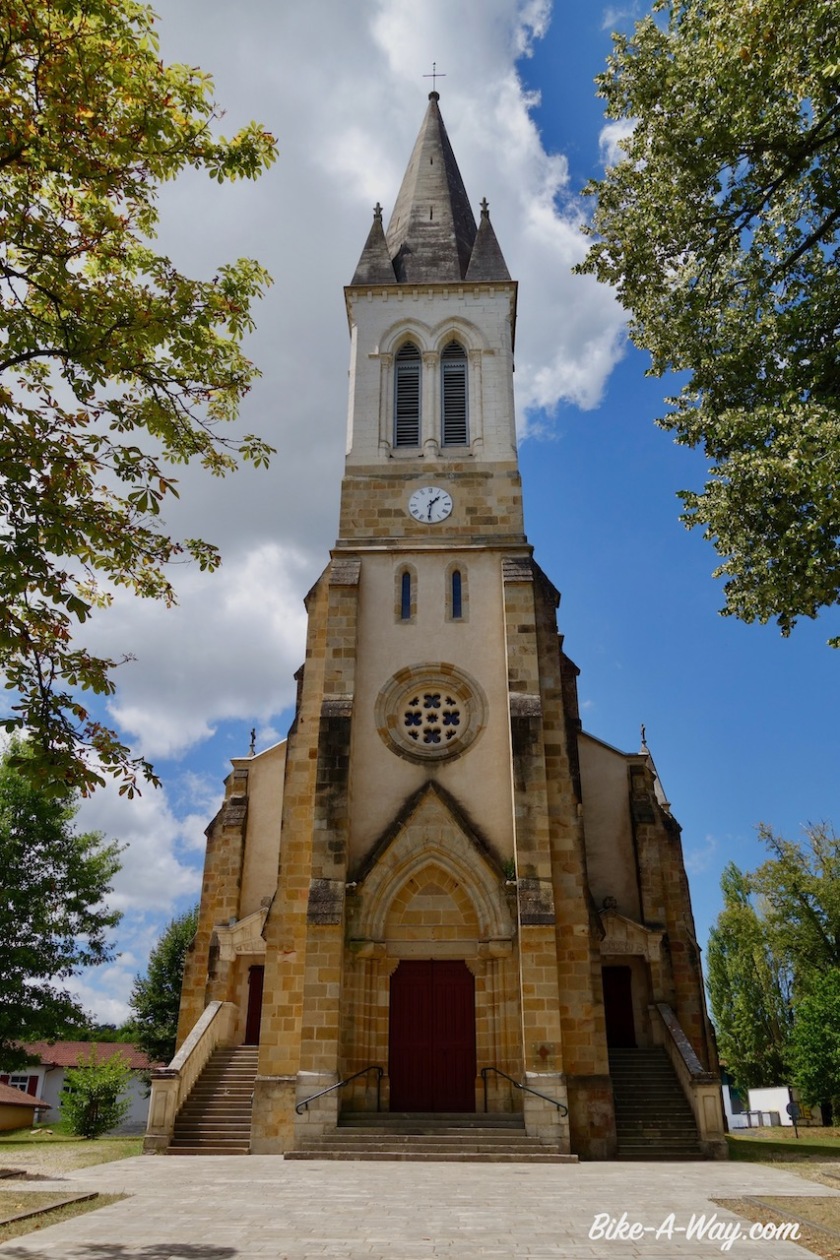 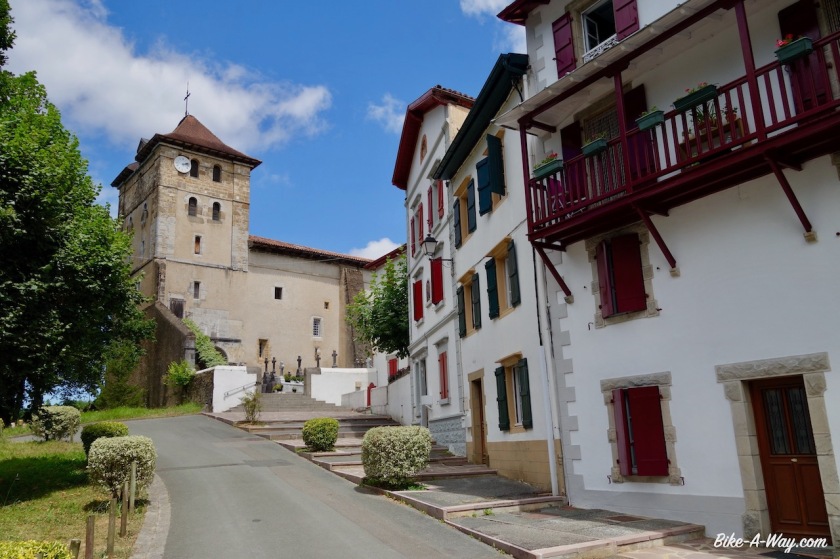 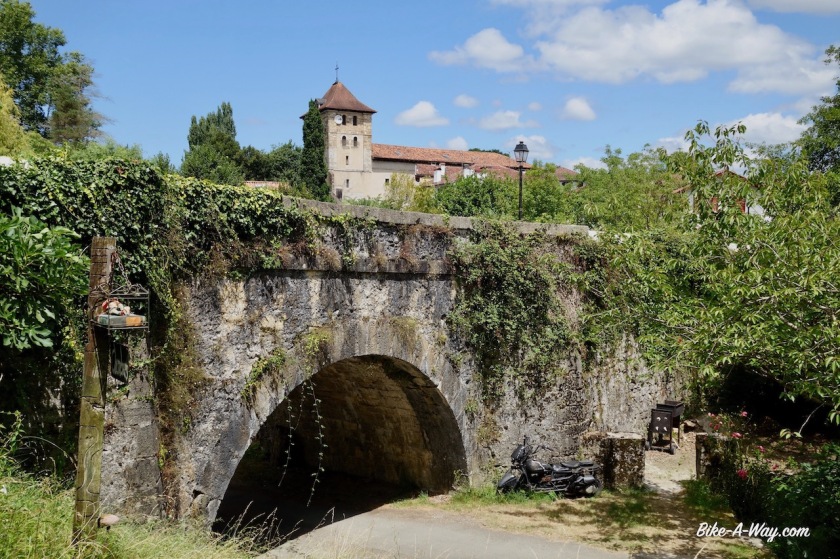 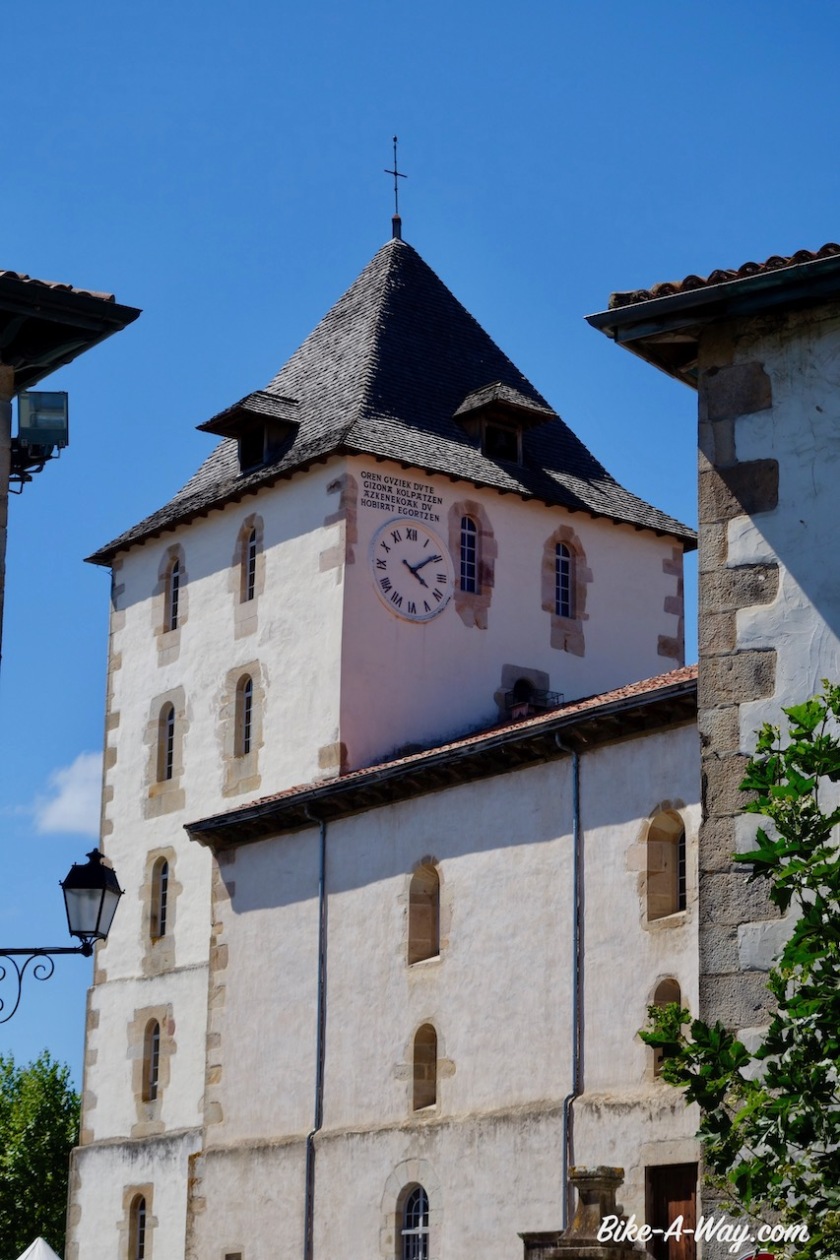 Some figures between my starting point in Belgium and the Spanish border:

Accommodation: all nights wild camping, except one night in the pilgrims gîte in Sommeval.

4 thoughts on “France: Via Lemovicensis & the Landes”